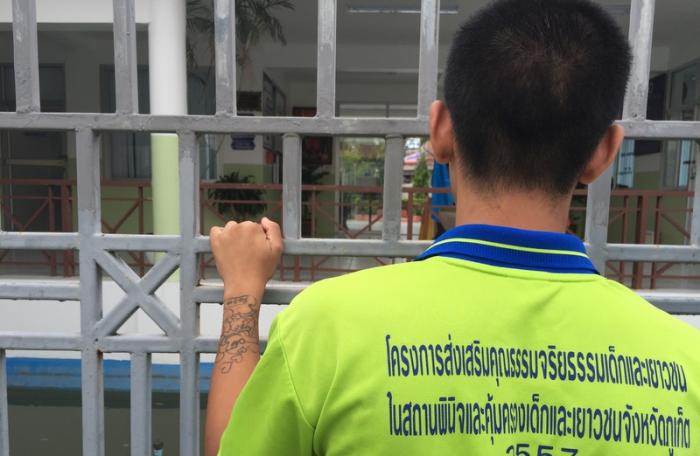 PHUKET: The director of the Phuket Juvenile Observation and Protection Center (JOPC) said she believes teenagers across Phuket are becoming more aggressive.

Rawee Kuhamooka told the Phuket Gazette that every year JOPC staff have to work harder to control their detainees. Ms Rawee’s comments come after a riot at the center earlier this month left the building’s grounds, cafeteria, therapy and treatment rooms in disarray.

Thirty-five juvenile delinquents tore apart furniture and discharged fire extinguishers in a riot that was only quelled after provincial police were called in.

“We can prove that [detainees] are more aggressive from how hard we have to work to control them,” Ms Rawee said. “Over the past several years we’ve worked harder than ever, even though the number of juveniles coming in the center is the same. Teenagers’ behavior today is characteristic of older criminals. Yet we still use the same soft laws and the same out-of-date methods to deal with them. This is why they’re never afraid of detention and are more likely to commit crimes over and over again.”

Every year, the Phuket juvenile center processes between 400 and 500 cases involving 15-17 year-olds who were convicted of committing a crime. Ms Rawee said the majority of the cases that are referred to the center involve possession of the category 5 narcotic krathom, followed by cases involving violent assaults and the illegal possession of a gun.

“Every day, we have around 30 to 40 teens in the center, who are overseen by about 10 officers,” she said. “The teens are divided into different correctional education classes based on the crimes they’ve committed.”

Ms Rawee said the detainees meet with a multidisciplinary team of psychologists, doctors, social workers and specialists within the first week of their arrival. Afterward, each detainee is categorized into low, medium and high risk groups, following a mandatory drug test and physical examination. Each detainee may spend no longer than 90 days at the facility.

“For teenagers, courts almost always give them the chance to come here first and almost never send them directly to prison,” Ms Rawee said. “More than 80 percent of our detainees are judged to be able to return to society,”

Ms Rawee said she believes the emphasis on treatment is not enough to deter those detainees deemed a ‘higher-risk,’ from recidivism.

“From my experience, I believe that family, society and our weak laws are the three main reasons our detainees are becoming more and more troublesome,” Ms Rawee said.

JOPC staff psychologist Phetcharat Phromphet told the Gazette that teenagers from divorced parents or troubled households are more likely to become aggressive, both at the center and out in society.

“It’s called imitation theory,” Ms Phetcharat explained. “If the kid is living with a violent or volatile family, they’ll internalize and imitate that behavior.”

“Teenage years are a time of change, and during that period they need a rational voice giving them advice, otherwise they will turn into their surroundings. If their family has problems, they’ll turn to their friends,” Ms Phetcharat said.

“On the other hand, if the family spoils their children, if the kids always get want they want, they’ll expect that in real society. They will dare to do anything to get what they want.”

A 17-year-old at the detention center, arrested for possession of marijuana and a gun, echoed Ms Phetcharat’s statements. The Gazette is withholding his name, as he is a minor.

“Actually, my mom knew that I was playing around with marijuana,” he said. “She tried to stop me, but I didn’t listen to her, I think because I’ve always been a little spoiled by my mom. I’m not afraid of her. And since she’s not always around, I still get to smoke.”

“My mom was very disappointed at me after my arrest,” he said. “I think, after I leave here, I will never do it again. If I do it again, next time I might not be taken here, but might go to jail. They gave me one chance already, so I have to be better.”

Ms Phetcharat said it doesn’t always take a volatile household or a pushover parent for teenagers to end up at the JOPC. Sometimes parents have no time to take care of their children, or they live far away from their kids.

“Teenagers are at that age where they’re still learning new things,” Ms Phetcharat said. “It’s the age of trying something new, the age of wanting to win or to be the best at something. Kids want to be recognized and appreciated by others, particularly by their peers.”

“Therefore, if they don’t live with their family, or if their family isn’t around to redirect them right away, the chances are greater that they’ll end up off-course,” she added.

After the family, society as a whole has large role in affecting teenagers’ behavior, Ms Phetcharat said.

“A high fluency in technologies like social media, also means that teenagers can access nearly anything at any time, which is another big issue,” Ms Phetcharat said. “This is part of the reason that they’re acting older than their age and more unexpectedly.”

Another 17-year-old who agreed to speak with the Gazette, said that he met his friends online and that they introduced him to drugs for the first time.

“I was arrested for krathom,” he said. “My parents work a lot, so I spend most of my time with friends. At first, I didn’t drink krathom, but when I started hanging out with them more often, I just wanted to try it.”

“The first time I was arrested and taken to the JOPC, I was very worried,” he said. “I heard from people outside that there’s a lot of hazing and pressure from the older generation inside and that the punishments were really harsh, but the JOPC is not like that. They teach us and change our minds a lot. I will never commit a crime again after I leave here. I think I’ve learned a lot here.”

Ms Rawee said she believes the teenagers under her charge are becoming bolder with each passing year. For her, changes need to be made in order to ensure that the JOPC can adequately focus on treatment and reducing recidivism.

“The most important part of this problem is that our laws are weak,” Ms Rawee said. “If the law is strict, people are deterred from crime, particularly teenagers. If we punish them harshly when they do wrong, they’ll be afraid of the consequences of doing it again.”

“Thailand’s laws give teenagers several chances,” she said. “The punishments are mostly just going to the JOPC, which isn’t much of a deterrent.”

“Laws and how we enforce them are at the end of the equation,” General Teerapol said. “The law gives teenagers multiple chances, as they are not old enough to think like an adult. This is an international standard and we cannot punish teenagers harshly.”

“Arresting teens isn’t our goal,” he said. “The real goal is to help them.”