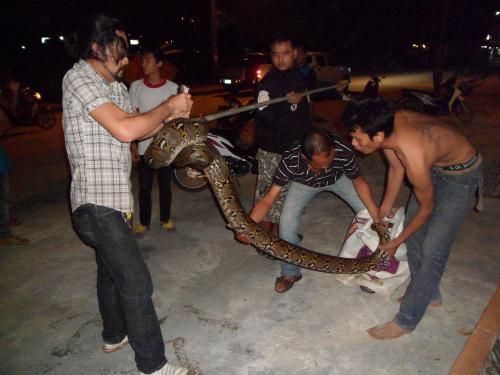 PHUKET: Rescue workers were called to recover large pythons in both Patong and Mai Khao last night after local Phuket residents raised the alarm due to the sheer size of the snakes.

Rescue workers from Patong Hospital were summoned to capture a large python seen slithering across the road in front of the Patong Municipality offices (map here) at about 9:30pm.

After wrangling with the reptile for about 10 minutes, rescue workers with the assistance of some local residents managed to secure the hefty reptile, measuring several meters long, in a bag.

Just over an hour later, rescue workers in Mai Khao received a call from local resident Porawat Sae-eiw, reporting that a large snake was in his ceiling.

“I was watching TV when I heard something on the roof. I got the flashlight and checked, and saw the snake had come inside the house through a gap between the roof and the [homemade] rain gutter,” Mr Porawat explained.

“I tried to get the snake out by prodding it with a piece of wood, but instead it slid into the ceiling,” he said.

“At that stage I thought it would be a good idea to call for help,” Mr Porawat added.

On receiving the call, rescue workers rushed to his house at Baan Suan Maphrao.

Familiar with the routine, the workers opened a ceiling panel and used a hook to retrieve the snake. They recovered the reptile, which measured more than two meters long, and bagged it.

Both pythons were released at undisclosed jungle locations.