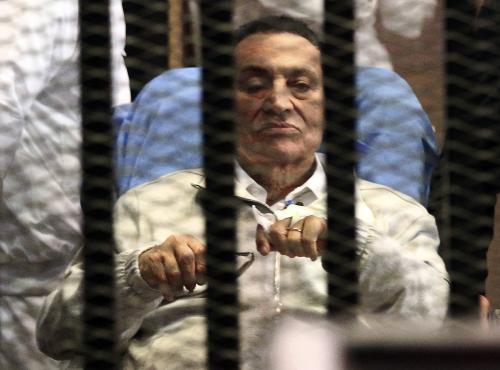 PHUKET: Egyptian security forces have arrested the top leader of the Muslim Brotherhood, state media reported today, pressing a crackdown on his group.

Mohamed Badie, 70, was detained at an apartment in Nasr City in northeast Cairo, the state news agency reported.

“That was after information came to the security apparatus locating his place of hiding,” it said.

The Facebook page of the Interior Ministry was showing a picture of Badie, with dark rings under his eyes, sitting in a car between two men in black body armour, with a caption confirming his arrest.

“Carrying out the decisions of the public prosecutor to arrest and bring forward the general guide of the Muslim Brotherhood Mohamed Badie, and through collected information and observation of movements it was possible for the criminal search apparatus under the direction of Cairo’s security (services) to arrest him ,the caption said.

“The necessary legal measures are being taken,” it added.

Badie is the Brotherhood’s General Guide.

He was charged in July with inciting violence along with other Brotherhood officials. Together with his two deputies, he is due to stand trial on August 25.

Interior Minister Mohamed Ibrahim told Al Masry Al Youm, a newspaper, that Badie had been arrested in the early hours of Tuesday.

PHUKET: Egyptian security forces killed the bureau chief of a provincial office of state newspaper Al-Ahram yesterday after opening fire on a car they thought had tried to escape from a checkpoint enforcing a dusk-to-dawn curfew, the army said in a statement.

Tamer Abdel Raouf, head of Al-Ahram’s bureau in Egypt’s Buhayra province, was shot dead while a journalist from another state newspaper, Al Gomhuriya, was injured. Journalists are exempt from the curfew.

The army said in a statement posted on Facebook that the car in which the two journalists were driving had raised suspicion by travelling at high speed during curfew hours without reacting to calls for it to stop or to warning gunshots fired in the air.

“No excessive gunfire was opened on the car in question nor any killing of those in it intended,” the statement said, calling on people to adhere to the curfew to facilitate the work of security services.

Egypt’s government ordered the curfew, set to last for the next month, after security forces last week broke up two protest camps demanding the return of deposed President Mohamed Mursi.

Almost 900 people, including more than 100 soldiers and police, have been killed since then.

PHUKET: The European Commission is to send a fact-finding mission to Gibraltar to examine the legitimacy of border controls imposed by Spain in a growing dispute over the British Mediterranean enclave.

It broke out after Gibraltar’s construction of an artificial reef using concrete blocks in the bay off the tiny territory. Gibraltarian authorities say the move was necessary to help marine life recover from overfishing.

Spanish fishermen counter that it hampers their access to certain waters. Spain, in turn, has toughened its border checks, leading to long queues for workers and tourists entering Gibraltar.

While Spain has threatened to take its claim on Gibraltar to the United Nations, Britain last week called on the Commission, the European Union’s executive, to send in monitors to check whether Spain’s controls breach EU rules.

“They agreed that a Commission fact-finding mission should as soon as possible examine in loco the border control, movement of people and goods questions,” a Commission statement said.

“President Barroso expressed his hope that Spain and the UK will address these matters in a way that is in line with their common membership in the EU.”

PHUKET: Al Qaeda is planning attacks on high-speed trains in Europe and the authorities in Germany have stepped up security on the country’s rail system, a German newspaper reported yesterday.

The information about the planned attacks came from the United States’ National Security Agency (NSA), which apparently intercepted a call between senior al Qaeda members several weeks ago, the mass-circulation daily said.

But the German Interior Ministry said it regularly received information about such threats and was not planning to increase overall security.

“It is known that Germany, along with other Western states, is a target for jihadist terrorists so we always assess warnings on a case-by-case basis but we already have a high level of protective measures and we do not plan to step these up at the moment,” spokesman Jens Teschke said at a routine government news conference.

The scandal surrounding the NSA’s global electronic spying operation has become a major headache for Chancellor Angela Merkel ahead of the September 22 election. Government snooping is a sensitive subject in Germany due to the heavy surveillance of citizens in the