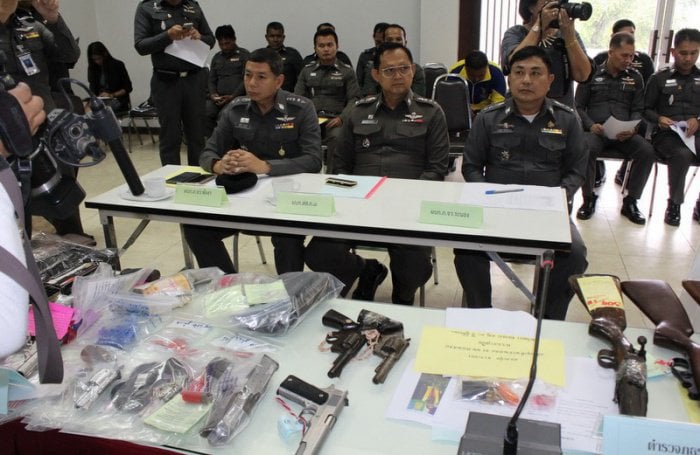 PHUKET: Region 8 Police sized more than 100 firearms, including one weapon of war, in a week-long crackdown ahead of tomorrow’s Loy Krathong festivities (story here).

In total, police seized 119 firearms and 732 rounds of ammunition.

“It is much easier to purchase guns right now than it used to be, which is of great concern. Having an illegal firearm can lead to other serious crimes,” Gen Chalermkiat said.

The illegal firearm trade is being facilitated by closed Facebook groups and other social media platforms, the Phuket Gazette revealed in an investigative piece published in September (story here).

Additionally, 31 people with outstanding arrest warrants were picked up and 61 suspects were apprehended for gambling.

“A lot of people join in the holiday festivities, which leads to an increased potential for criminal activity. Therefore the Royal Thai Police have issued orders to every police station to focus on crime suppression, as well as water and firework dangers. Additionally, we are tackling traffic issues and ensuring strong public relations so that people are ensured of their safety and can enjoy the festival,” said Gen Chamlermkiat.

During Phuket’s last major festival – the Vegetarian Festival – an innocent bystander was killed after being caught in a crossfire between rival gangs (story here).