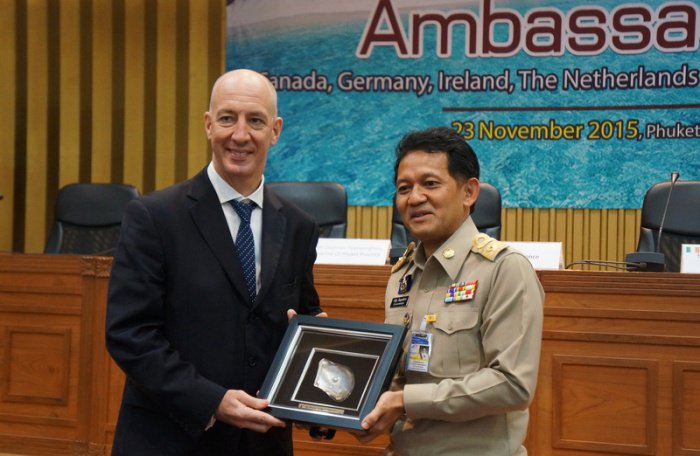 PHUKET: Tuk-tuks and taxis continue to undermine the progress being made in Phuket’s tourism industry, the British Ambassador to Thailand Mark Kent told the Phuket Gazette yesterday.

The ambassador’s concerns remain despite the National Council for Peace and Order’s cleanup of illegal taxi and tuk-tuk operators in July last year (story here).

“Some of the behavior and prices we’ve seen from the tuk-tuk or taxi drivers has led to a fall in confidence and a drop in the number of tourists because they’re a little bit scared about what is happening [with public transport],” said Amb Kent.

An airport taxi driver was recently caught rerouting passengers as a ploy to let tour companies sell holiday packages to them (story here).

This is not the first time that Amb Kent has voiced his concern about the island’s public transport situation.

In 2013, Amb Kent focused on why tuk-tuk and taxi drivers are continuing to charge tourists in Phuket higher fares than are charged elsewhere in the country during his discussion with then-Phuket Governor Maitri Inthusut and a number of other ambassadors (story here).

“That’s why we want to work for the mutual benefit of our tourists, the governor and officials here to ensure that this remains the case,” Amb Kent said.

Governor Chamroen confirmed to the Gazette that the ideas and suggestions put forward by the ambassador were going to be taken on board.

“Phuket is not only for Thailand – it is a city of the world for tourists from all lands. I am thankful for the ambassadors’ comments and will do my best to tackle those issues that are troubling Phuket,” Gov Chamroen said.

Two busted for smuggling 2.6kg of cocaine into Krabi