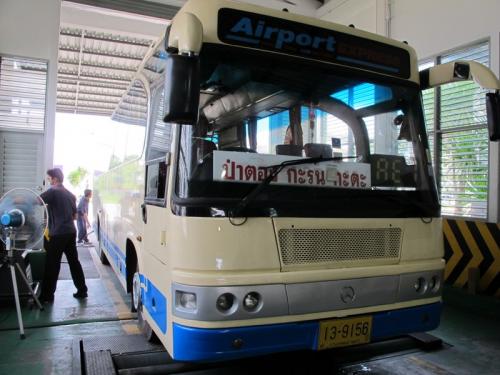 PHUKET: The Phuket Land Transport Office (PLTO) chief insisted today that the Phuket Airport Bus “hop on, hop off” service needs to be in gear and serving tourists by July 1.

“The first airport bus route, which will go to Patong, must be launched by July 1,” PLTO Chief Terayout Prasertphol told the Phuket Gazette today.

“The bus owner told me that he needed another month for his public relations and marketing campaign. He said that the bus service could be launched on August 1,” Mr Terayout said. “I said, ‘No, what you are waiting for?'”

The PLTO will issue the necessary licenses to the OS Car Rent and Tour Ltd Partnership for their service as soon as possible to ensure that the service will be ready on July 1.

“It is time to check the buses, install bus-stop signs and work on marketing and public relations,” Mr Terayout said.

“It has taken months to get to this point; I want to see the buses on the roads as soon as possible. Once we have the Patong route, we can expand the service to include routes from the airport to Rawai and Kamala,” he said.

The last stop for the current route will be the Baan Zan Market (map here). The buses will be at the market for only 10 minutes before departing and will not be allowed to pick up people from anywhere else in Patong.

“We will work on our marketing to let people know that we are about to launch the service,” Prakob Panyawai, the bus company owner, told the Gazette.

“We will start the service with six buses and just go from there,” Mr Prakob said.