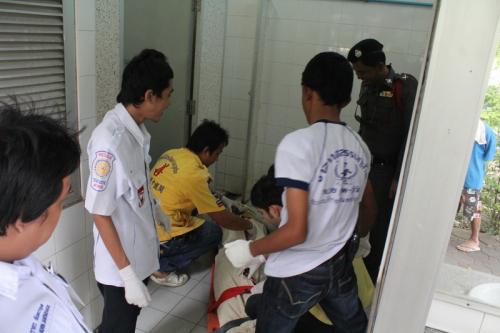 PHUKET: An unidentified man died shortly after taking a hit of heroin in a Phuket gas station today.

Witnesses saw the man park his motorbike near the men’s toilet and then rush into one of the four stalls. After a short period of time he toppled out of the stall dead, said Sakol Krainara of the Phuket City Police.

Police were notified of the incident at about 10:30am and rushed to the PPT gas station in Koh Kaew along with Kusoldham rescue workers.

Believing the man was suffering from cardiac arrest, rescue workers made a failed attempted to revive him by administering CPR.

“The man was about 30 years old and had a large tattoo on his right arm,” Maj Sakol said.

“We found a yellow straw he used to take the heroin still in his mouth. His wrist had some blood on it and tracks from the use of a syringe,” Maj Sakol said.

Other drug paraphernalia was also found in the toilet stall. However, no identification was found on the man.

“At this stage, we believe he died from an overdose, but we are continuing our investigation,” Maj Sakol said.