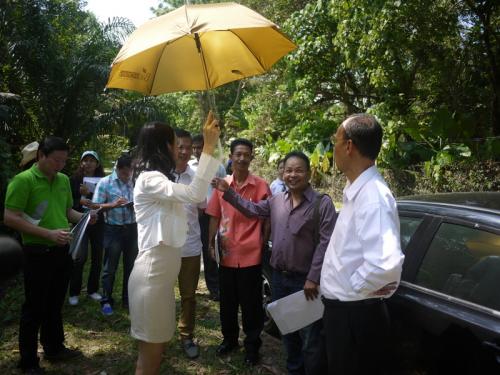 PHUKET: Conflicting descriptions of property boundaries on the land titles for a plot beside the Loch Palm Golf Course and for the course itself has prompted Phuket Vice Governor Somkiet Sangkaosuttirak to launch an investigation into which title deed is accurate.

Vice Governor Somkiet visited the site in person after Rattana Bunyoungponglert filed a complaint that Loch Palm had built a wall on her land.

However, Theera Wongsawanon, a representative of Loch Palm Golf Club, said, “We built the wall on our land according to the borders stated on our title deeds.”

In her complaint, Ms Rattana explained that the club had also installed a gate at the end of the paved lane to her land, which she said blocked her access to Kathu-Koh Kaew road (map here).

“The gate is manned by a security guard, and sometimes the guard won’t let people through, especially big trucks,” she said.

The gate was apparently installed two years ago. Ms Rattana said she filed a complaint with the local municipality, but received no response.

“I assigned the Land Department to examine both land title deeds again and confirm whether or not the street is a public thoroughfare and report the result to the Damrongtham Center [the provincial ombudsman’s office],” he said.

“The relevant officers will be called in to discuss the case after we learn the results,” he added.