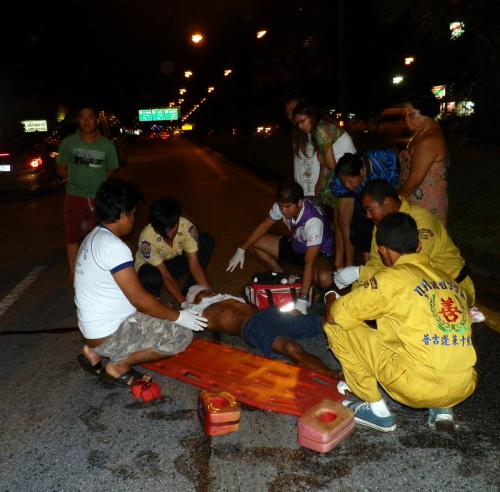 PHUKET: A tourist arriving on Phuket from Bangkok in his pick-up truck last night struck an unidentified man who allegedly had stepped out into one of Phuket’s busiest roads.

Thalang Police received a report at 11:45pm that a man had been hit in the southbound lanes of Thepkrasattri Road about 150 meters north of the Heroines’ Monument (map here).

At the scene, police found a man who appeared to be in his 30s injured on the road, and the driver of the Mitsubishi pick-up truck that hit the man, said case investigator Chatree Chuwichian.

“The man on the road was bleeding from his head. We transferred him to Thalang Hospital. We didn’t find any form of ID on him,” Lt Chatree said.

The 19-year-old driver of the truck, Areef Janchu, had remained at the scene with his truck.

He told police, “I drove down from Bangkok with a friend for a holiday. We were headed to Patong to find a room.”

“I saw the man standing on the divider in the middle of the road. Suddenly, he stepped into the road in front of me. He was too close. It was impossible for me to avoid hitting him,” Mr Areef said.