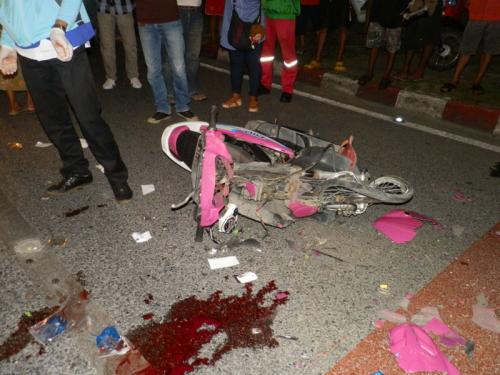 PHUKET: A Phuket teenager is in hospital this morning after the motorbike he was riding slammed into the back of a cement truck near the Heroines Monument in Thalang (map here) late last night.

Lt Col Apidet Chuaykue said Thalang Police were notified of the accident at one minute past midnight.

Police arrived quickly at the scene, along with an emergency-response team from the Kusoldharm Foundation, to find Natthaphon Suwan, 18, with a serious injury to his forehead.

He also broke an arm and leg in the accident.

Rescue workers failed to find a safety helmet at the scene.

“He is now receiving treatment at the hospital’s neurology ward. We cannot reveal any further details of the patient,” staff at Vachira Phuket Hospital told the Phuket Gazette this morning.

Arun Kanana, the 38-year-old driver of the cement truck, told police, “I was pulling over to drop off a friend and out of nowhere a motorbike crashed into the back of my truck at high speed.”

Thalang Police took photos of the scene before taking both vehicles to the Thalang Police Station to continue their investigation.