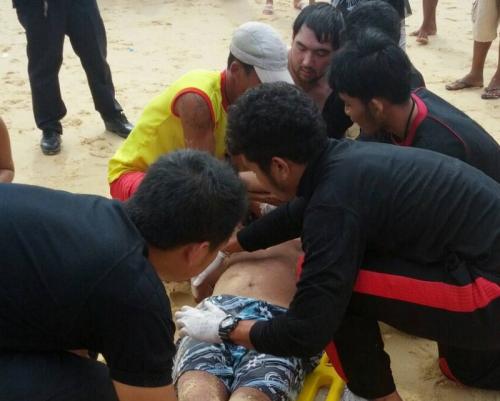 PHUKET: A Russian tourist in Phuket lies comatose in intensive care today after being pulled from the dangerous surf at Karon Beach yesterday afternoon.

The tourist, named by Patong Hospital as Kho Khay Gym, 31, was pulled from the water by beach vendors at about 4:30pm.

“Big waves hit him and dragged him out to sea. His friends called for help from the beach vendors, and it took about five minutes to rescue him,” Sub Lt Niphon said.

Four other tourists were rescued from dangerous rip currents at Kata and Karon beaches, all marked by red “no swimming” flags yesterday.

“We have red flags and warning signs in Thai, English, Russian, Chinese, German and Korean posted along the beach to warn tourists, and still they do not listen to us,” said Mr Uten.

“It would be much safer if they obeyed the warnings,” he added.

His death was the third drowning in Phuket since Thursday (story here).