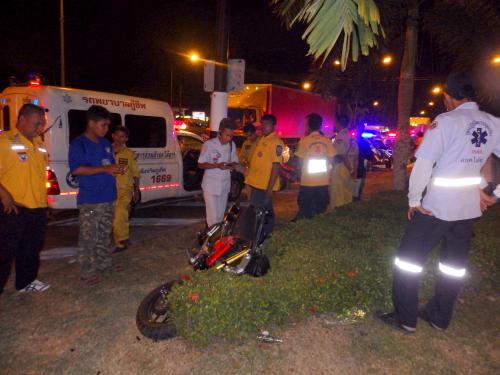 PHUKET: Although five road accidents sent five people to the hospital with injuries yesterday, Phuket has yet to record a single death for the new year.

The Department of Disaster Prevention and Mitigation (DDPM) today confirmed that one serious accident had been reported in Patong after midnight last night.

“A motorbike crashed into a pickup truck near the mosque on Phra Barami Road in Patong [map here],” a DDPM-Phuket officer told the Phuket Gazette.

“One man was rushed to Patong Hospital. Our report says he suffered serious injuries, but we have yet to confirm more than that,” he said.

“This incident will be added to our ongoing road toll, for which the tally for January 1 will close at midnight tonight,” the officer said.

Staff at Patong Hospital confirmed to the Gazette this afternoon that they had yet to report any deaths resulting from road accidents.

“Many people were brought in for minor injuries last night, but so far we have had no deaths resulting from road accident injuries,” one hospital staffer told the Gazette.

The total road toll for Phuket during the Seven Days of Danger national road-safety campaign currently stands at five dead and 30 injured in 25 accidents.

The road deaths reported so far in Phuket’s 10 Days of Danger safety campaign are: