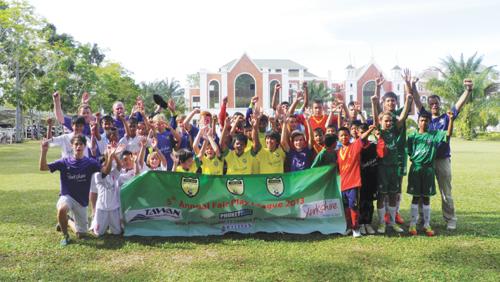 Run by Phuket Soccer Schools (PSS), the league is designed to promote fair play in football and help players integrate and play with other children from different schools, as well as cultural and social backgrounds.

This season PSS has introduced a “Bonus Points” system, where teams will be given extra points if they concede 0-2 fouls/free kicks in a match. Any shirt pulling or simulation (diving) will result in a straight yellow card and no bonus points will be issued during that match. This encourages players to be aware of fair play and the ramifications of cheating or playing unfairly.

The under-14s played two 30-minute matches. In the first round of fixtures, the Thailand Blue got off to a strong start, beating England 7-2; Spain came from behind to grab all three points with a 4-2 victory over Thailand Green, and Argentina sneaked past Brazil in a close match with a 3-2 scoreline.

The second round of fixtures saw some high scoring and close matches, with Brazil conceding a last second equalizer to tie 3-3 with Thailand Blue. Argentina played out a thrilling 6-6 tie with Thailand Green and finally Spain managed another win with a 9-1 victory over England.

The under 14s will continue their season until Sunday February 24 at BIS from 4:30pm and the under 11s will begin their season at 3pm.

It’s not too late to join the fun, PSS are still looking for boys and girls for both under 11 and under 14 leagues.

PSS will allocate them a team to play in where they will make new friends and have a positive footballing experience. The price of entry is just 500 baht for the season and players will get to keep their FPL kit.

PSS will also be offering tryouts to possible Academy under-16s at 6pm, after the FPL each week at BIS. Tryouts are open to advanced players born in 1997 and 1998, who are interested in training, training matches and tournaments.

Head Coach of PSS Martin Hill said: “PSS thinks it’s important [that] we emphasize and reinforce the importance of ‘fair play’ in football and we hope many positives will come out of the FPL league this year for both players and parents.”