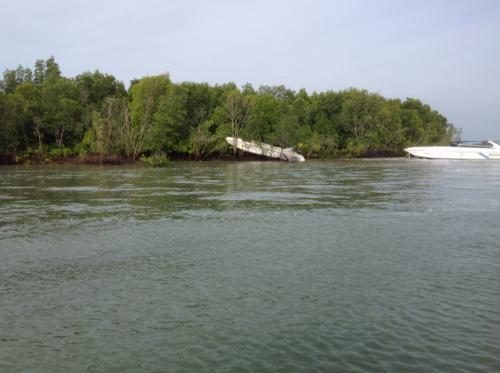 PHUKET: A group of tourists out to enjoy a scenic tour of Phuket’s east coast received a surprise yesterday when the captain of the speedboat they were riding on decided to take the eco-tourism slogan “bringing you close to nature” to heart.

The speedboat Panisa ended up high and dry among the mangroves at the entrance to the canal to Royal Phuket Marina, in Koh Kaew (map here).

Two passing speedboats, one named Peppermint, soon rendered assistance and took the party of tourists on board so they could continue their holiday.

One Phuket Gazette reader who witnessed the aftermath of the incident pointed out that the speed limit for all vessels approaching port is five knots.

Staff at Royal Phuket Marina and the Phuket Marine Police said they were unaware of the incident.

Logging raid finds over 100 rai of damage, no lumberjacks

Run like a girl… ahead of the rest – Triathlon Tips