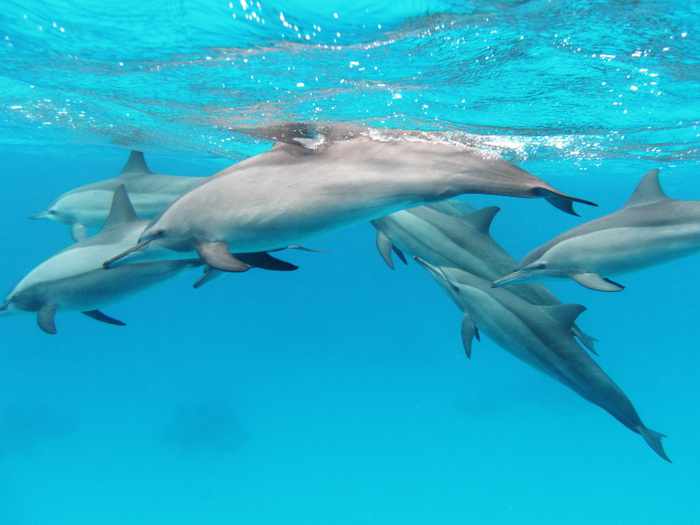 PHUKET: As Sea Shepherd and marine conservationists around the world prepare to battle the opening of the Nemo dolphinarium in Phuket, Capt Mike Fallows of Blue World Safaris continues to take hundreds of tourists to see a pod of these vastly intelligent marine mammals in the wild.

About 30 minutes after the captain’s safety briefing – including sea sickness tablets and a run down about the on-boat bar – the 16.3-meter multihull catamaran Blue World slides up against Koh Mai Thon.

“According to records, there has been a pod of dolphins living off Koh Mai Thon since at least 1970, and I am convinced that these dolphins are descendants of the same family,” Capt Mike says.

When Blue World Safaris first started visiting the pod more than two years ago, there were 22 individuals.

“But just over a year ago there was some kind of disaster, with some dolphins being washed up on the local beaches, and even one with a broken dorsal fin. We can only speculate as to what happened to them, but after these incidents the dolphins were extremely reluctant to come to us. It was upsetting to see that their numbers had dropped to around 15!”

However, Capt Mike delightedly reports to the Phuket Gazette that within the past few months his team and countless tourists have spotted at least six dolphin calves.

“The pod is not only around its previous numbers [now], but the dolphins also look healthy and once again are happy to approach the boat.”

Koh Mai Thon, the playground for these graceful mammals, is about 14 kilometers from Phuket’s Chalong Pier, which takes the speedy Blue World only about 30 minutes to reach.

“Blue World is the fastest and biggest of the very few power catamarans in Phuket. Being a catamaran she is both stable and more roomy than single-hulled boats. We are able to carry up to 55 guests and her top speed of 27 knots brings islands previously only possible [to access] by liveaboards [from Phuket] within easy reach for a day trip,” Capt Mike says. “For example, we can get to the Similans from Phuket in two hours and Phi Phi is just one hour away.”

Dolphin spotting is usually included on Capt Mike’s day trips to Phi Phi or Racha Noi, where guests swim, snorkel, kayak, free dive, scuba dive or even cliff jump, if they are so inclined. However, when it comes to dolphins, there are no guarantees.

“It’s not always possible to see dolphins, but sightings are so exciting that we feel that the endeavor is well worthwhile. We are very restrained in how we approach the dolphins, always allowing them to swim to the boat voluntarily and breaking off when they lose interest. As a result, it is even more enjoyable to see them jump and play for us. I especially like when they roll over in the water to look at us,” Capt Mikes says.

“There is a special affinity between man and dolphin and any encounter with wild dolphins is not only thrilling but leaves us feeling lucky and uplifted.”

Though dolphins may perform even greater feats in marine parks, those moments lack the same wonder as seeing them play in the wild, because audience members can’t hide from the fact that the animals suffer due to being kept in captivity.

In recognition of the rights dolphins should have, such as the same basic right of freedom as humans, India this year became the world’s fourth country to ban keeping dolphins in captivity.

Even the United States’ National Aquarium in Baltimore announced earlier this year that it is considering retiring its eight bottlenose dolphins and moving them to an oceanside sanctuary.

With the shift in mentality around the world on the rights of dolphins following the horrific documentary The Cove in 2009, perhaps tourists will bypass Chalong’s proposed dolphinarium and see the creatures in the beauty of the wild from aboard Blue World.

Local art on show this week at Central Festival