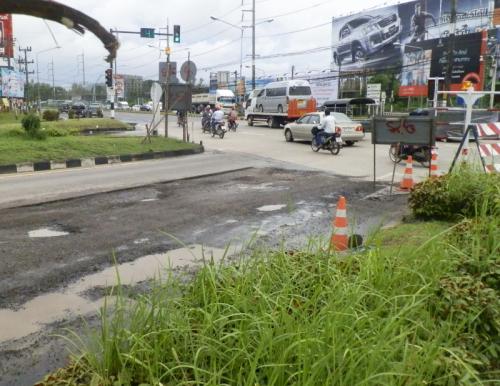 PHUKET: The long tailbacks on Thepkrasattri Road caused by the resurfacing of the bypass road at the Bang Khu Intersection in Koh Kaew has forced police to urge motorists to use alternative routes.

“We need to resurface about 1.5km of the [bypass] road, starting at the Bang Khu intersection,” said Phuket Highways Office Director Samak Luedwonghad.

“The road surface is uneven and broken up so much it looks like crocodile skin,” he said.

The effect on traffic has been dramatic.

“During rush hour, the traffic can back up all the way to the Heroine’s Monument,” said one disgruntled motorist.

Mr Samak said his office has scheduled to complete the resurfacing within 150 days.

“But I examined the site today and I don’t think it should take that long – I estimate it will take less than four months,” he said.

Traffic police have asked for a timely finish to the construction.

“Unfortunately, the daily rain we’ve been getting is delaying the construction,” he said.

“I ordered the southbound lanes at the Koh Kaew Intersection be given a longer green light during rush hours. This should improve the flow,” he said.

Sgt Pairote advised drivers to consider using the road behind the Premium Outlet mall instead of the bypass road (map here).

“Go through the Bang Khu Intersection towards town. Take the first u-turn and go straight across. That road takes you behind the Premium Outlet mall and reconnects with the bypass road farther down,” he said.

While traffic jams plague the Darasamuth Intersection, in front of the Central Festival shopping mall, as construction of Phuket’s first underpass continues (story here), the Bang Khu Intersection awaits progress as yet another junction to receive an underpass in Phuket (story here).

Phuket Governor Maitri Inthusut this week also unveiled plans for an underpass to be built underneath Chalong Circle, by far the busiest junction in the south of the island (story here).