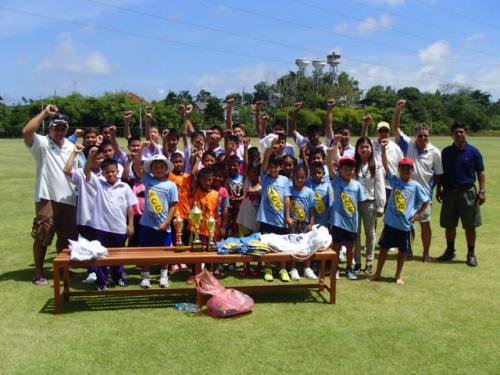 Although the international school teams were absent, four teams including representatives from the PCG’s Youth Academy, Baan Sapam and Thai Hua played some closely contested matches.

In game 1, the Youth Academy team, mainly comprising of under-10s, who have been honing their skills during the past six months, took on the older and more experienced Thai Hua boys, coached by Kru Sombat. In a closely contested match, youngsters from both teams showcased their skills which can only augur well for the future of cricket, with some great displays of bowling, fielding and batting from both teams. Thai Hua eventually prevailed as winners after a closely contested match.

Game 3 was the PCG Youth Academy versus Baan Sapam with the PCG team bouncing back with a confidence boosting win.

Game 4, Thai Hua took on the mixed team in another closely contested match, with Thai Hua securing their second win to remain undefeated and crowned champions.

The youngsters showed great sportsmanship congratulating each other at the end of each match.

The next round of the Sawasdee League should see the competition heat up as teams from Headstart, British International School and Kajonkiet are expected.

The PCG Youth Academy is held every Saturday morning from 9:00 am at the ACG. For more information contact chairman@phuketcricketgroup.com or click here.