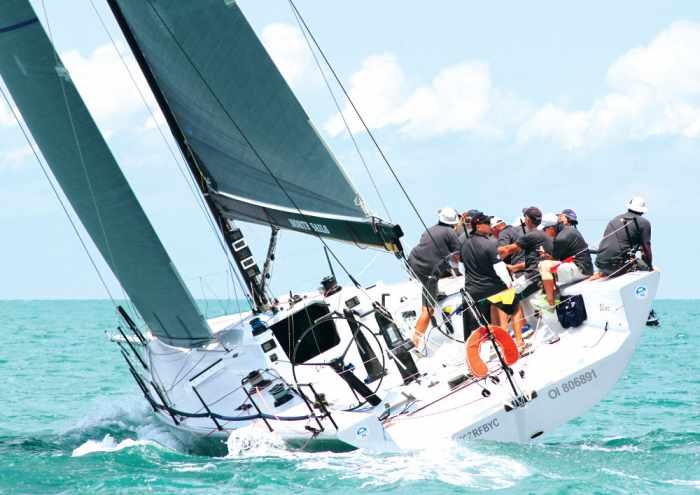 PHUKET: The shift to heavy weather this week has set the scene for dramatic racing off Phuket’s east coast as a fleet of 36 yachts compete in this year’s edition of the renowned Cape Panwa Hotel Phuket Raceweek Regatta.

Racing began today following last night’s gala opening party. Setting the courses over the next four days is Simon James, who has served as Principal Race Officer at Phuket Raceweek for the past 10 years.

Courses are set specifically to not favor any boats in particular, but the condition of each boat and their respective crews are critical factors, James told the Phuket Gazette this week.

“Only days ago the weather forecast for the regatta was for light winds… Now we’re facing blustery conditions, blasting upwards of 20 knots come Friday afternoon,” he said on Tuesday.

Racing and the strong westerly gusts are both set to continue through Saturday and Sunday.

“This week the waves have been hitting the west coast direct onshore. That means they keep standing up when they round the island, making the main race area of Chalong Bay a bit lumpy,” he said.

The start line will be in the sheltered area off the southern coast of Koh Lone so boats can start in flat water. After that they’ll have to battle the elements as well as their competitors.

Making sure the boats are in ship shape for racing has become a critical factor.

“As the Multihull Solutions Regatta last week pointed out, any boats that suffer breakages will suffer in the points rankings,” James explained. “But beyond that it will all be down to the crews.”

“It’s the biggest boat in the regatta, and it’ll handle the stronger winds and waves better,” James noted.

Yet, the Australian crew on Oi! will be up against some of the best crews in Southeast Asia.

“The crew on Foxy Lady have done very well in recent regattas, and although Fujin is a smaller boat, the crew is also in good racing form,” James said.

“Blue Note has just completed a refit, so it will be interesting to see how well they perform, but the pick of the bunch would have to be Island Fling. They are the rock stars to beat.”

In the IRC Racing 2 class, James has his eye on the 30-footers, and on Jessandra II, skippered by Red Bull Racing Australia Principal Roland Dane.

But even they will be up against local hotshots Neils Degenkowl on Phoenix, John Vause’s Ruby Tuesday and Ray Waldron’s Surf Patrol.

“There are no sure bets,” said James. “Skandia Endeavour of Whitby, up from Malaysia, always races well at Raceweek.”

In the Firefly 850 class, James’ top choice is Neil Ayre and his Advanced Racing Team on Mamba, who won the class in the Multihull Solutions Regatta.

Ayre will have to race well to beat Hans Rahman’s Voodoo, a regular winner at Raceweek, and fend off challenges from local racers Roger Kingdon on Moto Inzi and John Newnham on Twin Sharks.

“Even the bareboat charter class will be competitive through the performance-based handicap system,” James noted.

“Although these are the slower boats, we used this system at the Langkawi and Samui regattas and more recently produced some of the most competitive racing in the Multihull Solutions Regatta last week, when the class honors went down to the last race with only seconds separating the winners.”

For the best viewing of the yachts competing in the Cape Panwa Phuket Raceweek Regatta, spectators can take to the high ground south of the Evason to see boats heading for the marshalling area and start line.

Alternatively, the Khao Khad Viewpoint offers expansive views of Chalong Bay, or viewers can head to the Cape Panwa Resort to see boats mixing it up in the approach channel to Phuket Bay as they head to the safe water mark and beyond.