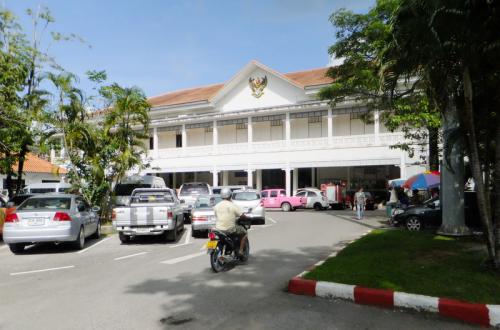 On November 27, thousands of protesters massed at the hall, presented Phuket Governor Maitri Inthusut with a bouquet of flowers, and asked him to shutter the building. He obliged, but carried on working at various locations outside the hall (story here).

Today, however, the front gate was open.

“The entrance gate is open, which means everyone can come inside. All the officers are back at work – and we have a lot of work to do,” Wassana Soonthornsiri, an officer at the Ministry of Finance, Phuket Office, told the Phuket Gazette.

“The Consular Affairs section (which issues passports), the Damrongtham Center, the Phuket Provincial Administrative Organization (PPAO) – every office in Phuket Provincial Hall is open. We are ready and happy to serve Phuket residents again,” she said.

Phuket Provincial Hall hours are Monday to Friday 8:30am to 4:30pm.