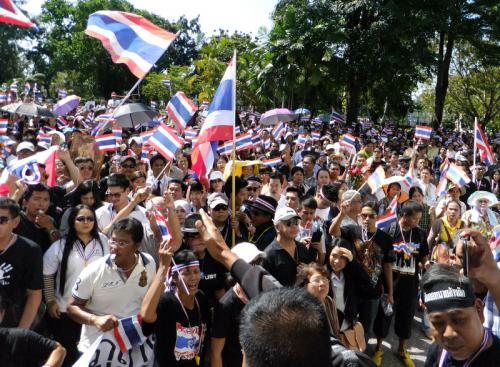 PHUKET: Thousands of Phuket residents stormed Phuket Provincial Hall this morning, forcing the provincial government to shut down in protest of “Thaksinocracy” and the Prime Minister Yingluck Shinawatra administration.

“Phuket residents came here without being called on, which shows that they truly don’t want this government any more,” said former Rassada Mayor Suratin Liangudom.

“We have prepared a bouquet of flowers to give to Governor Maitri Inthusut. We have also brought a whistle for him. If he blows the whistle, it will signify that he stands with the residents of Phuket.”

Protesters called on government officers to walk away from their stations for the next three days, as demonstration of their desire for PM Yingluck to dissolve parliament.

The protest started at 9am at Sanam Chai park, opposite Provincial Hall (map here), and has brought traffic in the area to a standstill.

About an hour after the protesters took over Provincial Hall, Governor Maitri appeared and accepted the bouquet and the whistle. He, however, has yet to blow it.

“We work under the rule of law for HM King Bhumibol Adulyadej and will not waiver in our dedication,” Governor Maitri told the crowd. “We will continue to provide the best for all residents, and ensure that all are happy to live in Thailand.”

The governor was then quickly escorted back to his office by 80 bodyguards, 40 civil volunteers and and 40 police officers.

The officers will remain on site to ensure the protests continue to be peaceful, said Phuket City Police Superintendent Sermphan Sirikong.

“We are making sure the crowd remains under control and no third-party agitators disguised as protesters start causing trouble,” Col Sermphan said.

“However, I believe that Phuket residents will not use violence during their protest,” he added.

The protests in Phuket are part of the larger movement seeing protesters take a stand in Bangkok and provinces across the nation (story here).