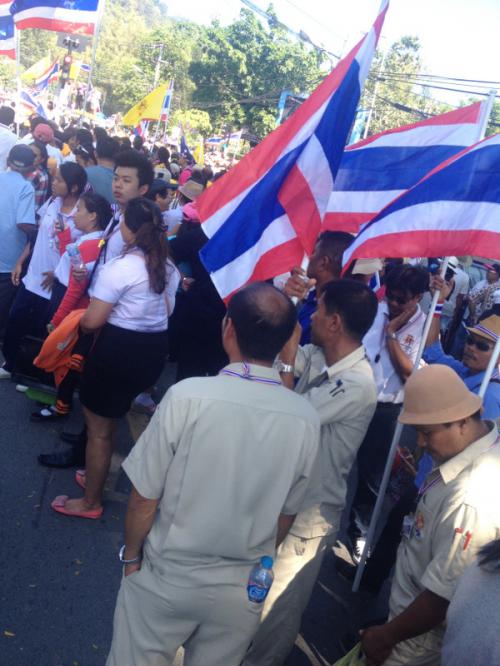 PHUKET: Thousands of jubilant anti-government protesters are gathered outside of the main government buildings in Phuket Town, celebrating the decision of Prime Minister Yingluck Shinawatra earlier today to dissolve her government.

The protesters, however, vow to carry on protesting until the People’s Council proposed by Suthep Thaugsuban, the former deputy prime minister and protest leader in Bangkok, is set up.

The whistle-blowing, flag-waving, ribbon-wearing crowd continues to grow as protesters from all over Phuket, including government workers, hospital staff and students gather in front of Phuket Provincial Hall (map here).

Protest co-ordinator Amnuay Kumban said that groups had paraded all over Phuket Town to celebrate the dissolution of PM Yingluck’s government.

But he vowed that protests would continue despite the dissolution.

“We can’t stop now, because PM Yingluck’s team will keep working until a new government is set up. We will continue to protest until Suthep Thaugsuban sets up the People’s Council,” he said.

Another protest co-ordinator, Theerawuth Sritulalak agreed. “We will continue protesting, as they’re doing in Bangkok. I want to see the People’s Council first. Actually, we’d be even more satisfied if the Shinawatra family left Thailand.”

“Right now many roads are closed,” said one officer. “It’s best to avoid going through town, or use a motorbike if you must.”

Romanian arrested with 3kg of cocaine at Phuket Airport