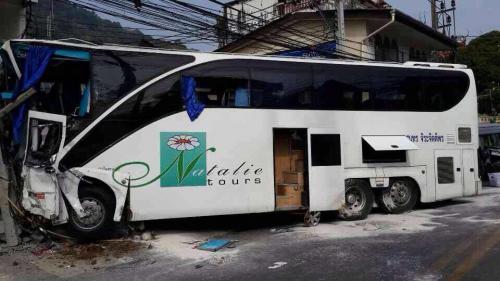 PHUKET: The Phuket Land Transport Office (PLTO) has included a ban on buses travelling over Patong Hill on its list of nine suggestions to prevent more fatal accidents from occurring on the notorious incline.

“Over the years, there have been many accidents on Patong Hill involving buses or trucks that have had brake failure. These accidents have cost many lives,” Mr Jaturong said.

The list was drawn up at the request of Governor Maitri following the most recent fatal accident on Patong Hill last Sunday, when a runaway bus loaded with Russian and Thai tourists slammed into five vehicles and a concrete barrier.

Two people were killed and 26 were injured in the accident, which was reportedly caused by brake failure (story here).

The full list of safety recommendations handed to Governor Maitri yesterday is as follows:

1. Ban all buses and trucks from Patong Hill at all times, and transfer passengers to and from Patong by van.

3. Set a maximum age for all buses and trucks travelling over Patong Hill.

5. Stop traffic from Baan Mon from entering the junction at the bottom of Patong Hill (map here) so that inbound traffic to Patong flows smoothly, thus reducing heavy vehicle brake usage while descending the hill.

6. Create a dedicated lane over the hill that motorbike riders must stay within.

8. Do not allow buses and trucks to use the hill when entering Patong, but still allow them to use it when exiting Patong.

9. Levy maximum penalties for all moving violations and impose heavy fines on business owners for any illegal infractions by their drivers, whether on the hill or approaching it.

“Governor Maitri accepted these suggestions and will call together officers from the relevant departments and representatives of bus transport companies to discuss and finalize which measures should be used to prevent any further accidents on Patong Hill,” Mr Jaturong explained to the Phuket Gazette.

“A date for that discussion has yet to be set, but I hope it can be done as soon as possible,” he added.

Meanwhile, motorists are advised that Governor Maitri will lead a team of officials on an inspection of the road over Patong Hill tomorrow morning.

“The inspection is being carried out so that officials better understand which safety recommendations can be implemented and the positive impact they can have on road safety over the hill,” Mr Jaturong said.