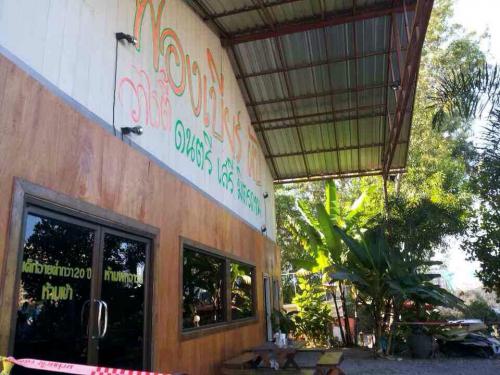 PHUKET: A Patong Police sergeant has been suspended pending an investigation into the shooting death of a 27-year-old bar worker from Soi Bangla early yesterday morning.

Officers arrived at the Fong Beer Pub on Phang Muang Sai Kor Road (map here) at 6am to find the body of Sawitree Kaewnin, from Phattalung, slumped over a table in front of the venue.

“She had been shot in the left ear and the bullet had exited through her forehead,” said Patong Police Investigator Jirasak Boonsang.

“On the table, among beer bottles and cigarettes, was an empty holster. On the ground was an 11mm handgun and an 11mm shell. Nearby we found a magazine still loaded with five bullets,” he added.

By the time the officers arrived, Sgt Pongsakorn Treeyuth of the Patong Police had already been rushed to Patong Hospital for a bullet wound in his right hand.

“Witnesses explained that Ms Sawitree and Sgt Pongsakorn knew each other. Ms Sawitree worked as a waitress at a pub on Soi Bangla,” Capt Jirasak told the Phuket Gazette.

“At this stage, we believe that Sgt Pongsakorn removed the magazine before using the gun to show Ms Sawitree how a person could be held from behind with a gun pointed at his or her head.

“It seems he forgot there was still a bullet in the chamber, and the gun accidentally fired,” he said. “The same bullet that killed Ms Sawitree exited her head and struck Sgt Pongsakorn’s right hand.”

Sgt Pongsakorn was off duty at the time, Capt Jirasak added.

“We are continuing our investigation into the incident. In the meantime, Sgt Pongsakorn has been suspended until the case is closed,” he said.

Phuket honors victims on ninth anniversary of the tsunami