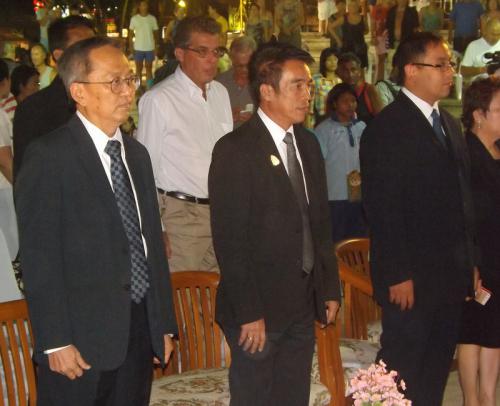 PHUKET: The Phuket community yesterday morning honored those who died in the devastating tsunami that struck the island in 2004 with a ceremony at the Tsunami Memorial Wall in Mai Khao followed by the traditional “Light Up Phuket” candle-lighting ceremony on Patong Beach last night.

About 50 people turned out at the Tsunami Memorial Wall in Mai Khao, including a few foreigners. The service in Mai Khao began at 8:30am with Buddhist monks conducting a mass prayer, followed by a Muslim service and then a Christian service.

After the religious ceremonies, attendees observed one minute of silence to remember their loved ones lost to the waves on December 26, 2004.

Wreaths were laid along the wall starting at 10:30am, with the ceremony drawing to a close at midday.

Central to the service was the laying of flowers in remembrance of Bhumi Jensen, the 21-year-old grandson of HM King Bhumibol Adulyadej who was killed by the tsunami. 800 lanterns were released last night to honor the victims.

At 6:30pm, the annual Light Up Phuket candle-lighting ceremony was held on Patong Beach.

Each year, thousands of people turn out to dig holes in the sand and place lit candles within them in honor of tsunami victims.

One German woman at the event told the Phuket Gazette that a large group of her extended family was in Patong when the tsunami struck.

“My family and relatives were here. I was studying in university in Germany and had to take some exams, so I couldn’t come for Christmas. I planned to join them later to celebrate New Year’s together.

“Then one of my relatives called me and told me that 10 members of my family had been caught up in the waves. I rushed to Phuket. Just a few survived,” she said, sobbing. “I vowed to come back here every year.”

Daniel Bruni, 43, came to Thailand in 2004 with his brother to travel for three months.

“After we got to Phuket, my brother decided to visit Khao Lak, so he went up there alone,” he recalled.

“When the tsunami came, I called my brother but he didn’t answer. On December 27, I went to the hotel in Phang Nga where he was staying, and the staff told me they had no information about him and said he wasn’t in his room.

“I asked them to open every room in the hotel to look for him, but I didn’t find him. After that, I went to the hospital and looked in every bed, but he wasn’t there either. I kept looking for a week, and then I stopped, but I stayed in Thailand, waiting for news.

“Three months later, the police contacted me and told me they had found his body.

“I went back to Switzerland after that, to take care of my mother, but then about two years ago, I decided to come back to Thailand and live and work here,” Mr Bruni said.

Hannes de Vos and Vanita Kennelly, from South Africa, were not in Phuket when the tsunami struck.

“We were at home in our country on that day when we heard the tragic news. We love the sea, and the victims probably did too… but we never know when the sea might take our lives,” Mr de Vos said.

“This is our first time to participate in this event. We don’t know where our tears are coming from. We saw a lot of people who came back here with tears of remembrance,” said Ms Kennelly.

Wanmanee Peelahgaeo, from Udon Thani, was working in a beachfront restaurant when the tsunami came. “I am the only one from my group of friends who survived. It killed all my friends,” she said.

“That morning, I was cleaning the restaurant when someone said that the seawater had gone out almost a kilometer. My friends and I ran down to the beach to see what they were talking about. Then the big wave came.

“My friends and I ran away in different directions. After the wave receded, I went back to look for them. There was water up to my knees and I found my friends’ bodies floating in it,” she said.

“I always ask myself, ‘Why didn’t you hold their hands and run away together?'”

Ms Wanmanee made a heart shape in the sand and filled it with candles for her friends.