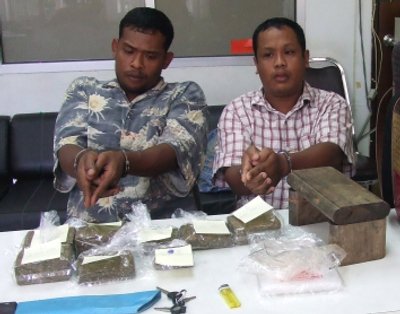 A search of his person uncovered a bar of dried marijuana in the right pocket of his jeans.

Admitting the cannabis was his, the suspect was somehow encouraged to tell officers he had more marijuana inside a room at the apartment block.

This was bad news for Mr Worrapoj, who was caught in the act of putting seven more bars of marijuana into plastic bags when police entered the room.

Both men were placed under arrest and will be charged with narcotics offenses.

The arrests are in line with the drug suppression policy of Phuket City Police Superintendent Wanchai Ekpornpit, Col Wijak said.

Use of illegal drugs, especially marijuana and ya bah (methamphetamine), appears to be spreading among Phuket youths, he said.

Although possession of the drug has been decriminalized in many countries, convictions for possession with intent to sell still carry stiff penalties in Thailand.

The Office of the Narcotics Control Board lists marijuana as a Category 5 narcotic.