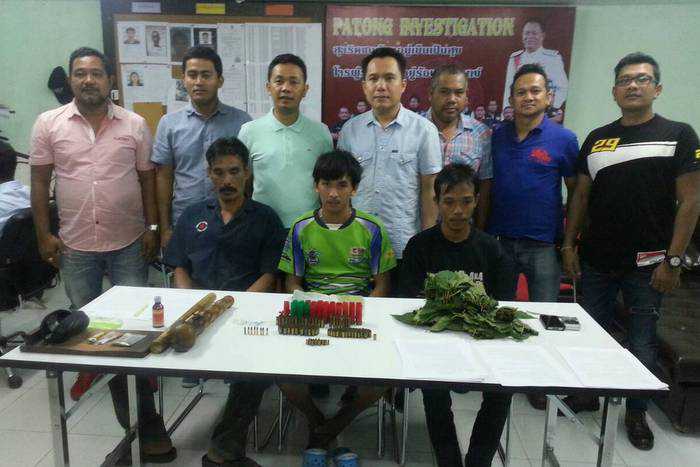 PHUKET: Patong Police netted three men in two raids yesterday as part of a crackdown on illegal drugs and firearms.

“We were informed by undercover officers that suspects were spotted carrying weapons to and from the house,” Lt Col Sutthichai Tianpho of the Patong Police told the Phuket Gazette.

“We raided the house last night and found an array of live ammunition, as well as empty bullet casings and shotgun cartridges.”

During a second raid last night, police arrested a Myanmar national named by officers only as Mr Koo, 23. Mr Koo was found in possession of 500 grams of kratom leaves, as well as .6 grams of marijuana.

“Undercover officers told us that Mr Koo had been selling illegal drugs to migrant workers in Patong,” Col Sutthichai explained.

“Acting on the tip-off, we caught Mr Koo in possession of the drugs on Soi Kok Moo [Pig Sty Alley].”

Both Mr Somphon and Mr Koo were charged with possession of Category 5 drugs and Mr Satit was charged for possession of ammunition without a permit.

“We are trying our best to crack down on crime in the area,” Col Sutthichai said.

“We hope to make Patong a safer place for everyone who visits.”