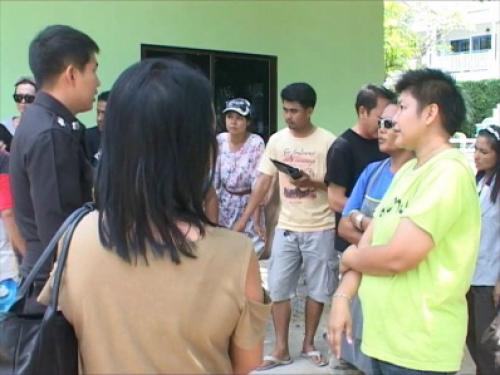 PHUKET: The Karon Police do have balls, but heavy-handed tactics in selling the tickets will stop, the Karon acting police chief confirmed to the Phuket Gazette today.

The news follows a mob of angry residents in the popular Phuket tourist area of Karon Beach gathering at the newly-established Karon Police Station yesterday.

Their complaint: the “strong tactics” used to sell tickets to a policeman’s charity- ball function to be held in Phuket Town on January 25.

“Four men claiming to be ‘assisting’ officers of the Karon Police have been selling charity concert tickets to beach vendors, sunbed rental operators and restaurant owners. The men said that the tickets are being sold under orders from Karon Police Superintendent Sirisak Wasasiri, who is now on vacation,” Karon Kamnan Winai Chidchiew said.

The tickets are being sold for 1,000 baht a piece, which the vendors said would be used in the Royal Thai Police effort to suppress drug and tourism related crime.

“Each beach operator was forced to buy five to 10 tickets. Once they bought the tickets, they noticed that some of them had numbers on them, and some didn’t,” Kamnan Winai said.

Lt Col Narong explained that the though the ball is being held by the Karon Police they passed off many responsibilities to an event-coordination company. The company was responsible for sourcing the evenings entertainment, as well as for selling tickets.

“The organizer will give Karon Police Station 300,000 baht after the event to support our crime and drug suppression project,” Lt Col Narong said.

However, the organizers have now been told that they must stop forcing people to buy tickets.

“If anyone forced you to buy a ticket, you can return it to the organizers and register your name with us before January 16 for a full refund,” Lt Col Narong said.

“You can also file a complaint with us against the individual that forced you to purchase the ticket,” he added.

The police ball tickets are still up for grabs for those interested in supporting the event, which will feature performances by Thai country music singers Sam Sao SilverGold, O Apisit and Thep Thoonjai. Tickets for the ball include food and drink.

The event will be on Friday, January 25 at 6pm at the Pitak Grand Ballroom on the third floor of the The Metropole Hotel, in the heart of Phuket Town.