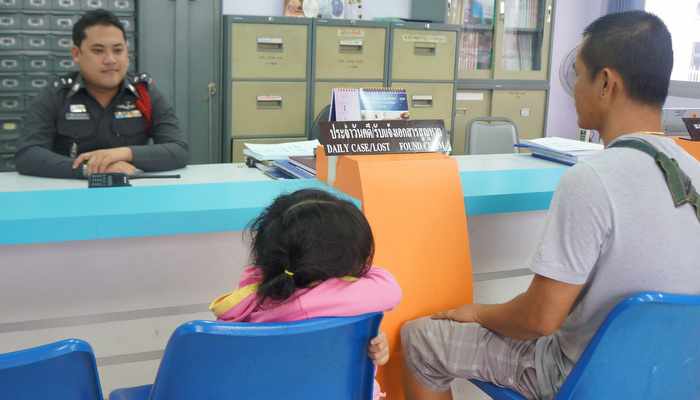 PHUKET: Anxious parents of missing children no longer have to wait 24 hours before police can take action to find them, under a new policy revealed by Phuket City Police Superintendent Sermpan Sirikong last week.

“Now, when someone in your family goes missing, you can inform police immediately,” said Col Sermpan.

The new policy came into sharp focus this week when the worried parents of 13-year-old Sirinut “Nong Guy” Chaowalert made a public appeal for any information to locate their daughter, who disappeared from the family home in Rassada last Saturday (story here).

Nong Guy was found alive and well, staying at a friend’s house in Thalang, on Wednesday, much to the relief of her parents (story here).

“We did not have much information, but at least we were able to send out an alert to patrol officers throughout Phuket and share this information among people registered on the police Line chat group.

“The next day, Nong Guy’s mother arrived from Bangkok and gave us photos of Nong Guy, which we quickly shared.”

Col Sermpan explained that steps were taken to heighten public awareness of the dangers of kidnapping following the kidnapping and rape of 6-year-old “Nong Cartoon” in Bangkok last December (story here).

Anti-kidnapping posters have already been distributed in Bangkok schools and in some other provinces, he said.

“In Phuket we have not been given the order to distribute these posters yet, but if your child or someone you know goes missing, you can notify the police immediately,” Col Sermpan explained.

Col Sermpan cited the case of a mother currently wanted by police for abducting her two British-Thai daughters from their natural father as being one that might have benefited substantially, if Pattaya and Phuket police had been able to take action earlier (story here).

However, some Phuket schools have already taken the matter into their own hands.

“Every morning, each of our teachers checks a list of students to make sure all students are present,” said Utain Jitsamruoy, director of Satree Phuket School.

In one Phuket cold case, Samudchaya “Nong Pin” Yanpunya went missing at the age of 12 in December 2011. She had skipped school on that day and gone to a Phuket Town internet cafe to use the popular social networking portal Facebook and “do homework”.

Just 11 days after Nong Pin’s disappearance, the girl’s mother, Samruay Saenthaweesuk, voiced her fear that the 12-year-old might have been abducted by someone she met online while using Facebook (story here).

The possibility of such predation was confirmed by reports the day before from Nakhon Sri Thammarat where 37-year-old Phuket resident Wimol Srida was arrested for raping three teenage girls he met on Facebook. The youngest was just 13 years old (story here).

In April this year, fast action by a Phuket village headman prevented the abduction of a 4-year-old boy.

Worried parents of the boy, named by police only as “Nong Ice”, reported their son missing in less than 24 hours (story here).

“After failing to find him, village headman Sangkom Sinthupradit went to Phuket’s main bus terminal with the parents and many local village defence volunteers to see if he was there,” explained Col Sermpan.

At the station, the search team found the boy, and the couple attempting to abduct him and take him to Bangkok.

Days after Nong Dear went missing on a Friday night from her neighborhood in Chalong, bone fragments – later confirmed to be hers via DNA testing – and her tattered clothing were discovered in a nearby wooded area (story here).

Video Report: Call rings out across the Kingdom for Miss Phuket Universe beauties