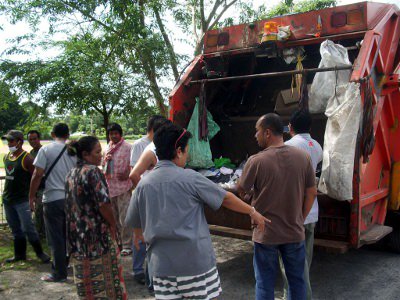 PHUKET: A garbage truck driver came across the dead body of a newborn baby while separating trash in the back of his truck in Pa Khlok this morning.

Thalang police were notified of the grim discovery by a Pa Khlok Tambon Administration Organization (TAO) officer around 8:30am.

“The baby was wrapped in a T-shirt and pieces of newspaper and put inside a plastic bag. It was picked up from the trash put out near the remote-controlled airplane grounds [in Pa Khlok],” said the truck driver, Manop Itthirit.

Prapate Tiranon, head of the Pa Khlok TAO’s Disaster Prevention and Mitigation Division, said the body was probably that of a boy born about one month prematurely and dumped shortly thereafter.

“We don’t know how long the body had been there [in the garbage],” he added.

A large crowd of local people gathered around the garbage truck.

One local resident told the Gazette, “It is sad. The baby was just born. You can see the umbilical cord is still with him.”