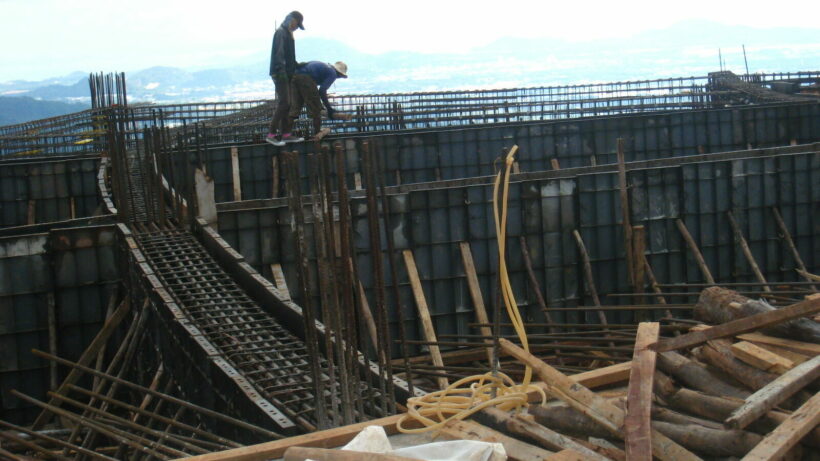 Yesterday, Phuket’s governor Narong Woonciew inspected workers’ construction camps throughout the island. His inspections concerned the disease control measures that were put in effect after 13 workers at a Patong camped tested positive for Covid, which led to officials claiming the camp down in a month of “Bubble and Seal” quarantine.

Kathu District Chief, Trithip Sakulpradit, and officers from the Office of Disease Prevention and Control Region 11, came with Narong to inspect a workers’ camp at a waterpark, says the Phuket office of the Public Relations Department in their report. It was not stated whether they gave any of the under-construction rides a whirl.

Wanna Sangtuang, who manages the camp, told Narong and his government entourage that there are currently 450 workers at the camp, such as Burmese nationals and Cambodian nationals.

The report did state the future waterparks name. However, the contractor has been identified as JWS Construction, which is constructing what they refer to as the “Vana Nava Water Park’” for the Andamanda Phuket project.

The PR Phuket report did not name the waterpark under construction, yet the contractor was identified as JWS Construction, which is building what it calls the ’Vana Nava Water Park’ as part of the Andamanda Phuket project.

The project is a section of the 20 billion baht “Blu Pearl” project which will consist of a hotel, shopping centres, and commercial property on Phra Phuket Kaew Rd, Kathu.

The site manager, Wanna, says the camp has strict measures to help their workers, including taking their temperature and making them wear masks. “In the camp, we also manage the space clearly by separating bathing areas, toilets and living areas, so we are pretty confident about hygiene,” adds Wanna.

She also claims nearly 100% of the camp workers have been fully vaccinated.

Narong adds that provincial officials are especially interested in workers’ camps on the island, notably, making sure the workers are vaccinated to ensure herd immunity amongst them. He went on to say that having only 1 entry/exit point makes it easy to control the worker’s movements. He did not state whether this could constitute a fire hazard.

The governor says he has ordered all camp managers to establish stricter measures for their employees and to use the same system SHA managers employ at hotels. Thus, managers can reach immigration, or the Phuket Employment Office/other officials if need be.

The governor continued to say that officials will use camps with “high scores” to serve as role models for other camps. He says that they have also made a “better information system” pertaining to migrant workers in Phuket.

According to a broadcast yesterday, the Chief of the Phuket Employment Office, Ubon Chuaiphat, there are 26,764 migrant workers registered as working in the Phuket construction sector. The confusing arithmetic was not explained.

Also, according to information provided yesterday, this time from Pracha Asawathira, Manager of the DEPA office in Phuket, “among those who are 18-64 years old, 35,168 have received their first injection”.

Martin
According to a broadcast yesterday, the Chief of the Phuket Employment Office, Ubon Chuaiphat, there are 26,764 migrant workers registered as working in the Phuket construction sector. Also, according to information provided yesterday, this time from Pracha Asawathira, Manager…

riclag
You would think these govt actors ,in  Petri Phuket would of learned from the Bkk construction sites crisis and taken preventive measures  like testing  and mitigation strategies!

AlexPTY
oops, i read "concentration camps"... scared me for a moment
vlad
Are they guarded to prevent these migrants leaving the camp for a day out shopping or getting vital supplies ?
Paco
Phuket governor another ass.. it was if you reach 90 infections sandbox is cancelled, lies. Not 1 person in Thailand government or who has any power (lol they think) tells the true... for me these kind of people are nothing and…