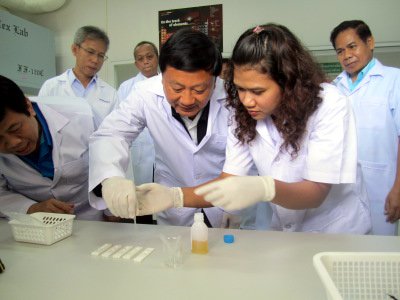 The governor officiated at the the event at the Regional Medical Sciences Center in Thalang this morning and offered a urine sample which was then screened for all five classes of illegal narcotics.

After a few minutes’ wait, the negative results were announced prompting the crowd of about 25 attending officers and officials to give a celebratory ovation.

“I am glad to have the drug testing center so we can work together to solve Phuket’s drug problem,” Gov Tri said.

“The Phuket center can now test for narcotics including amphetamines, ecstasy, marijuana, cocaine and psychotropic substances,” he said.

Gov Tri said that the large numbers of people coming to Phuket, including tourists, contribute to the developing market for drugs and spread of drug problems.

“Therefore, the problems will not be solved so simply,” he said.

“Having the center here in Phuket will help the investigation processes,” he said.

“Instead of transferring samples to Surat Thani to be tested, we will save a lot of time now by testing in Phuket,” he explained.

Phuket students to have tablet ‘e-textbooks’ next year