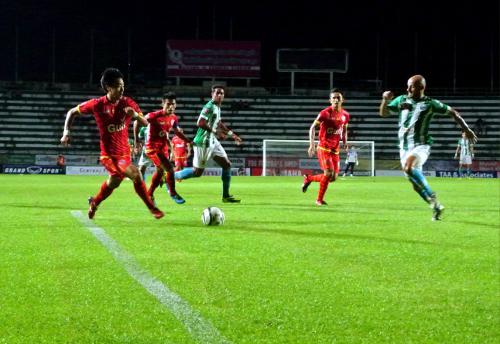 PHUKET: Phuket FC fans, players and coaching staff are all able to rest a bit easier now that the club has ended a two-month winless run, having prevailed at home 1-0 over the Gulf Saraburi “Warlords” last night at Surakul Stadium.

Prior to last night’s win, the Islanders’ last triumph was on August 11 when they downed Nakhon Pathom 2-0, also at home.

The latest victory’s only goal was scored by Phuket captain, Ekartit Somjit, who lobbed the ball over the visitor’s keeper on a breakaway seven minutes into the second half.

Perhaps due to dwindling support coupled with the timing of the Phuket Vegetarian Festival, last night’s match turnout of just over 1,200 was the club’s all-time low in their three seasons so far in the Thai first division – Yamaha League One (YL1).

Coming off the bench in the second half, Sukree E-tae and Ludovick Takam squandered a good chance to double Phuket’s lead, while Saraburi only narrowly missed a number of chances to equalize, having dominated possession in Phuket territory for much of the final 20 minutes.

Indeed, Phuket’s keeper Ninuruddin “Spider Ming” Nide-ha was stretched to his limits, bombarded by a seemingly endless run of attempts by the opponents, whose well-executed set-play game lacked only in the finishing touches.

Maintaining a clean sheet through to the end of five minutes of extra time allocated, Spider Ming was subsequently named “man of the match” for his fantastic performance.

The victory, which restored the Islanders’ 9th place position in the 18-team YL1, was a big psychological victory, not only for Head Coach, Stefano “Teco” Cugura – earning only his second win in 11 matches since taking the reigns – but especially for fans.

Of the two sides’ previous five meetings in the last three years, only one resulted in a draw, while Saraburi claimed all four of the other results – outscoring Phuket 11-3… now make that 11-4!

As a result, Saraburi fell from 6th into 7th place, ousted from their spot by Trat FC who beat Rayong United 5-2 on Saturday.

Following are all YL1 results from the weekend:

Like other teams, Phuket have only three matches remaining this season, which are as follows:

No seat belts worn, but no fatalities after van flips twice