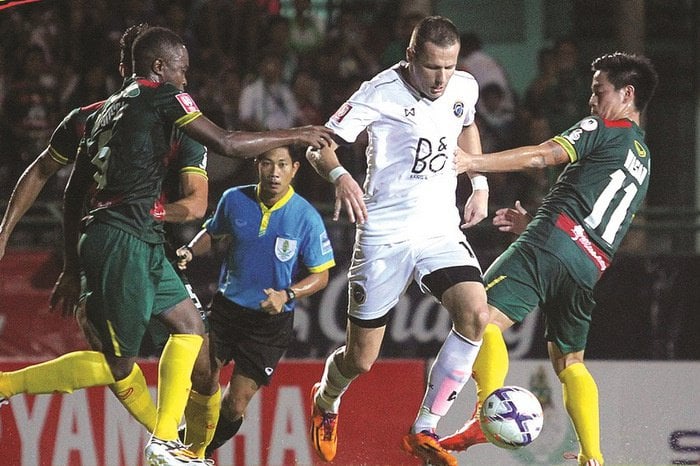 PHUKET: Phuket FC’s 2-0 victory over the Pattaya Dolphins at Surakul Stadium in Phuket Town last Saturday elevated the home side move from 10th to sixth place on the Yamaha League One table.

Pattaya United came to Phuket with a full squad, looking to hold up play with defense and score on the counter attack. The plan almost worked.

After nine minutes, Pattaya striker Milan Bubalo of Serbia broke into space on the far right corner and sent in a cross that teammate Chairat Buran fired just over the crossbar.

The Ronins responded strongly two minutes later with a long ball cross from the right wing by Suriya Prawarana.

Phuket’s Berlin Nlome Ndebi received the ball in front of goal and quickly fired at the net. His shot beat Pattaya keeper Pat Piyaphatpiti, but was cleared off the line by defenders.

The Ronins came close again in the 23rd minute when Pradipat Armatantri passed the ball back out of the Pattaya box to Moussa Sylla, who sailed it over the crossbar from 20 yards.

Phuket FC goalkeeper Piyawat Intarapim had to wait until just before half time to make his first save, from a shot fired by a Bubalo free kick 20 yards out.

Phuket FC had better control of the game in the second half, but it was the Dolphins who came close to scoring first, from a free kick 30 yards out, again delivered by the dangerous Bubalo.

In response, Pattaya FC ramped up their attack, but failed to capitalize on the chance for an equalizer with a daring overhead kick by Serbian forward Nikola Komazec in the 74th minute.

Pattaya keeper Pat superbly saved an attempt by Phuket’s Berlin Nlome Ndebi just two minutes later, but the patient Cameroonian slotted the ball into an empty goal in the 81st minute after receiving a low cross from teammate Pipat Tonkanya.

“This result was earned through hard work by the team and working together.” he said.

“I feel very good, and very happy to see fans with smiles on their faces as they left Surakul tonight. We faced a big team. We had a little pressure in the first half, but the boys handled them very well.”