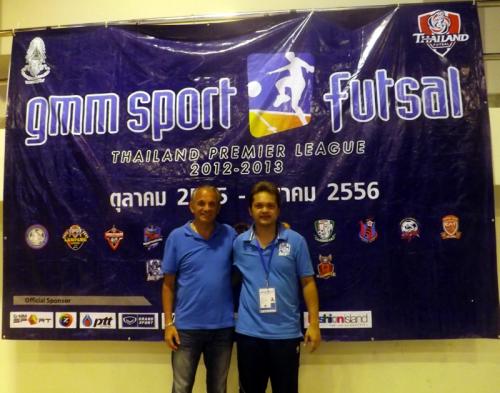 PHUKET: With the Thailand futsal season rapidly winding down, Phuket United maintained their good run of form, winning their third match in a row by defeating Southern rivals, Surat Thani 4-2 in a tense yet thrilling match on Saturday night in Phuket Town.

In their first meeting back in December in Surat Thani, Phuket were pounded by a score of 6-1.

That match was the first in which Brazilian Jardel had played for Phuket United and the skillful winger was looking to avoid a similar result this time around.

Anticipating the rematch, a large contingent of orange and blue shirted “Lightning Shrimp” fans from Surat Thani were hoping for a repeat of the first result, setting up their cheer base behind the east-end goal, defended by the visitors in the first half.

However, a Phuket defensive blunder – resulting in an own goal early in match – drove the Lighting Shrimp cheer squad into an electrical frenzy.

Phuket got it together at the start of the second half when Jardel quickly found the equalizer. Minutes later, the Andaman Pearl’s leading scorer, Jackson Santos seized the lead with a brilliant goal, his 28th of the season.

With tension of the Southern showdown intensifying with every foul whistle, a composed yet cunning Jardel extended Phuket’s lead in the 32nd minute with his second goal of the match.

Pushing on with a power play attacking formation – leaving their goal undefended – Surat Thani finally found the back of the net moments later through Wiwat Thaicharoen.

However, a tight Phuket defense were quick to exploit Surat Thani’s vulnerable defenses a moment later, with Nattapong Buachai doubling his side’s lead on a counter attack.

Despite back-and-forth play, the final score of 4-2 was sealed by the officials final whistle.

Speaking to the Gazette after the match, Vic Hermans, head coach of the Thailand national futsal squad, said he and his wife had enjoyed watching the match.

“The high energy of Thai futsal fans is wonderful. They’re all so into the game and you can really feel the tension between the two rivals during the game. Yet at the end, everyone is friendly and paying tribute to each other.”

“Thai futsal is really coming strong. You can see the difference between the Brazilian style of play and that of the Thais, who are really eager to play strong and fast early on.

“Jardel, Santos and Marcos clearly knew how to keep composed and take control of the game, and that’s the most important aspect of futsal – control, that is to not let your emotions control the match…”

Phuket United have two more matches at home this season, both of them this week.

The next match is this Wednesday evening, against 13th placed Prachin FC, which will be followed by a match on Saturday, March 9, against 14th placed Samut Prakarn.

Both matches will be played at the Saphan Hin Indoor Sports Complex with 7pm kickoffs.

Admission is 100 baht for adults, while students with ID and children under 150 centimeters get in for free.

Jackson Santos told the Gazette after the match, “It is really important that we win these last two home matches so we can make our season goal of finishing in the top 5 of the league.

“If we can win at home first, and then concentrate on our last two away matches against Bangkok [March 13 ] and Highways Department [late March, TBA]”

Other TFPL Results over the weekend