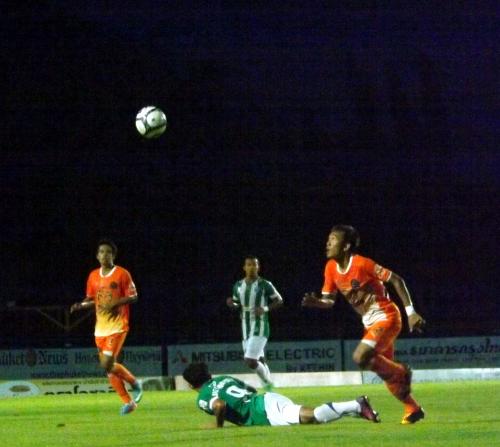 PHUKET: The Islanders were unable to maintain their top-five standing in conclusion to the Yamaha League One (YL1) 2013 season’s first half, losing at home 0-1 on Saturday evening to a more-determined Nakhon Ratchasima FC.

Saturday’s game was played under clear skies at Surakul Stadium, with approximately 4,000 football fans turning out, including a contingent of orange-clad die-hards who’d bused it down from Thailand’s Northeast.

The match’s only goal was scored by the Korat Swat Cats’ Japanese striker and leading scorer, Yusuke Kato, who converted a corner kick on 64 minutes.

Now with 9 goals this season, Kato is joint fourth in the YL1 golden boot race, along with the Port Lions’ Brazilian stalwart Leandro Oliveira and Bangkok’s Swede sensation, Carl Watson.

Bangkok’s Brit, Lee Tuck (12 goals) is on track for earning the top scorer honors for the second year in a row, while Khon Kaen’s Argentine Recio Eduardo and Nakhon Pathom’s Ivorian star, Camara Souleymane each have 10 goals.

Meanwhile, Phuket’s top scorers – Luiz “Dudu Purcino (6 goals), Giorgi Tsimakuridze (4), Geoffrey Doumeng (3), Nenebi Sylvestre and Chana Sonwiset (2 each) – are all hoping to regain their rhythm in the season’s second half.

As a result of Saturday’s match, Phuket and Korat swapped rankings, with the latter having an edge by just a single point (26 vs 25).

And although 6th placed Phuket are only 4 points behind 3rd place, Bangkok FC (29 points), competition for the final promotion spot to the Thai Premier League (TPL) is heating up with a handful of teams in mid-table region still in contention.

Meanwhile, the top two teams, Air Force (40 points) and PTT Rayong (39 points) should not have too much trouble maintaining their momentum towards the TPL.

Following are all Yamaha League One results from the weekend:

and from the Thai Premier League

Sixth place Phuket will be challenged for their ranking at home yet again, this Saturday, July 6, with a tough league match against 7th placed BBCU.

Although the BBCU Pink Panthers also have 25 points, Phuket’s goal difference of +5 gives them an edge over BBCU (0).

Kickoff will be at 6:30pm at Surakul Stadium (click here for map). Tickets 100 baht, kids free.

Phuket FC will then make the long trip to Bangkok to face SCG Muang Thong United, currently second in the Thai Premier League, following the draw for the Thai FA Cup Round-of-16. Phuket will travel to Muang Thong on July 10 to see if they can advance to the quarter final stage of the competition.

Other FA Cup fixtures are as follows:

Win or lose, Phuket will immediately return home to play out the final 40 minutes of a league match with PTT Rayong on July 13.