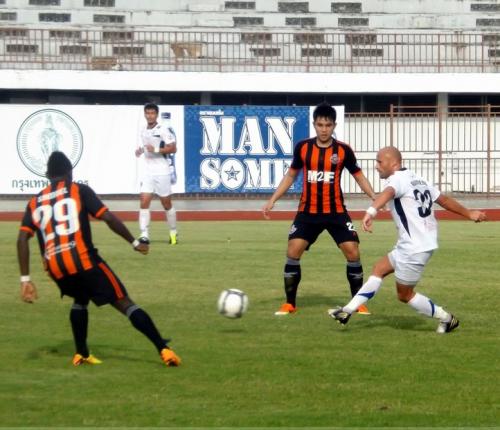 PHUKET: The Islanders dropped one place to sixth of the 18-team Yamaha League One (YL1), after playing out yet another draw – this time to Bangkok FC in a tense yet thrilling 1-1 dead-lock on Saturday evening in Thailand’s capital.

Bangkok also lost their 3rd place standing, falling into 4th as a result of the draw and in conjunction with results of other matches this weekend.

The game, both sides’ 19th of the 34 fixture list in the 2013 Yamaha League One season, was played in front of about 4,000 spectators at Bangkok’s Chalerm Prakiet Stadium in Bang Mod district in Thonburi, just off the west bank of the Chao Phraya River.

The stadium’s east and west stands were jam-packed with orange and black “Iron Bulls” and “Bulligans” fans, while the hardly-noticeable visitor’s contingent comprised of some 30 Bangkok-based Phuket supporters.

As to the reason for the unusual absence of a respectable Phuket away-game contingent, there is no doubt that die-hard Hulk supporters, who usually attend such away matches, were still devastated from their recent, disappointing FA Cup road trip to Muang Thong (story here).

Nonetheless, it was Phuket who drew first blood to silence the energetic Bangkok fans in only the 8th minute. The Islander’s new Thai signing from Chonburi, Sukree Etae beat the Bangkok keeper at the far post after a meandering run which carved up the Bulls’ defense.

Back-and-forth play ensued and the home team would eventually find the equalizer through speedy Ghanaian striker Samuel Donquah, beating Phuket’s keeper at the far post on 27 minutes, topping his team’s celebration with an impressive display of acrobats to the pleasure of much of the stadium (click here for the goals and match highlights).

Despite commendable attacking attempts by both sides, and a highly anticipated debut of Phuket’s key new signing, Cristian Alex – on-loan from top tier Brazilian club Cruzeiro – the only mentionable highlight in the rest of the match were a series of abusive verbal and physical exchanges – although no one managed to get ‘carded’ for dissent.

Knocking Phuket out of 5th spot on Sunday was Gulf Saraburi, who prevailed 2-0 away to lowly, Khon Kaen; Bangkok were also bumped down by the Singhtharuea Port Lions who downed Trat at home 3-0.

The Port Lions now have 34 points – six more than Phuket and Saraburi and two more than Bangkok; PTT Rayong sealed their 2nd place standing on 41 points after their 1-0 home win to Nakhon Pathom, while Air Force still hang on in 1st place with 43 points, despite losing on the road to Krabi on Sunday.

The Andaman Eagle’s new Brazilian signing, Valci Junior – previously of Rayong United – has nine goals this season – eight from his old side on the Eastern Seaboard, and now one with his new team across the Phang Nga Bay.

The YL1 will now break for a week as all teams prepare for a busy August schedule, with each team looking to play 6-8 matches in the month.

Boasting the most number of draws in the YL1 this season (10), Phuket urgently need to inspire/spark a winning streak if they hope to meet the goal of promotion to the elite Thai league, TPL.

Their next shot will be at home on Saturday, August 3, against 15th place Thai Tobacco Monopoly. Stay tuned for match teaser.