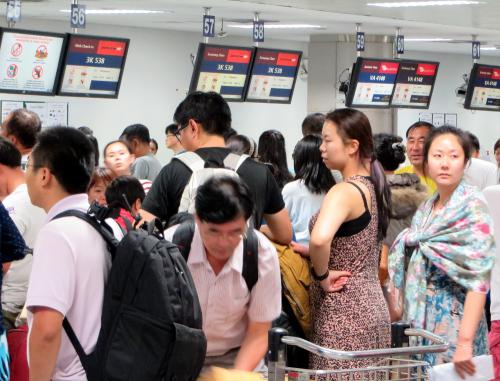 PHUKET: Officials expect the number of Chinese tourists coming to Phuket to drop by 40 per cent this month, despite the fact that Chinese New Year falls on January 31.

Chinese New Year traditionally brings a boost in Chinese tourism to Thailand, but this year fewer tourists from Greater China, including Hong Kong and Taiwan, are expected to celebrate the holiday in the Kingdom.

Piyaman Tejapaiboon, president of the Tourism Council of Thailand (TCT), said that the political turmoil in Thailand poses risks to the tourism market, which is still in the high season. Normally, the country welcomes about 2.5 million foreign tourists in January.

During the first quarter, numbers are expected to drop 60 per cent from the first quarter in 2013. Bangkok would be hit the hardest with a 70-per-cent drop, while Chiang Mai, Pattaya and Phuket would fall about 40 per cent.

Sugree Sithivanich, deputy governor for marketing communications at the Tourism Authority of Thailand (TAT), expressed concern about the decline in short-haul passengers during Chinese New Year amid the political chaos. Safety is among their key concerns.

Chanapan Kaewklachaiyawuth, secretary-general of the Thai-Chinese Tourism Alliance Association, said the street protests would scare off Chinese travellers until March.

Numbers among other nationalities are expected to drop as well.

Anake Srishevachart, president of the Thai-Japan Tourist Association, said the political strife has caused a big drop in travellers from not only mainland China, but also Japan, Hong Kong, South Korea and Taiwan. The lower numbers are expected to continue until next quarter.

Incentive groups are expected to suffer the biggest drop. This group of travellers is a key revenue contributor to the tourism industry as they spend double what average tourists normally spend during their stays.

The TAT has met with caretaker Tourism Minister Somsak Pureesrisak to discuss how to deliver a unified message to the public to help tourists understand the true situation and save the country’s image from political damage.

Cruise high over Phuket with the PIMEX lucky draws