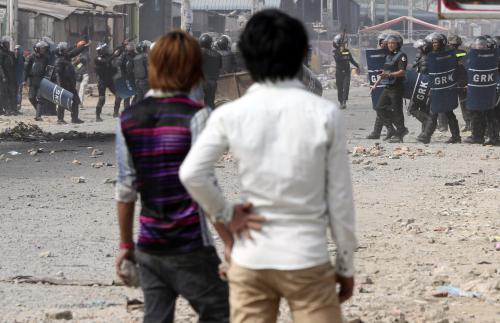 Military police opened fire on workers protesting outside a factory in Phnom Penh on January 3 and a spokesman for the U.N. High Commissioner for Human Rights said five people were killed, with 20 wounded by gunfire and beatings.

“We are following the situation in Cambodia with serious concern and are deeply alarmed by the disproportionate use of force by law enforcement officials in responding to demonstrations,” the spokesman, Rupert Colville, said in a statement dated January 7.

“We urge the Cambodian authorities to launch a prompt and thorough investigation and to ensure full accountability of members of security forces found to have used disproportionate and excessive force,” Colville added.

He said the whereabouts of 23 people detained following the clashes, including one minor, were unknown and that full access should be granted to their families and legal representatives.

Kheng Tito, spokesman for the National Military Police, said three people had been killed and 26 injured in the clashes for which he said the police were sorry.

“We would like to pay condolences to those injured and dead from the clashes aimed at protecting national security,” he said.

He said 10 people had been arrested under security laws and did not know if the government would investigate the violence.

The U.N Special Rapporteur for human rights in Cambodia, Surya Subedi, is due to visit the country from January 12 to 17, his first visit since a general election last July that returned long-serving premier Hun Sen to power.

The opposition Cambodia National Rescue Party (CNRP) says the election was stolen by Hun Sen’s Cambodian People’s Party and has demanded a re-run.

The garment workers who went on strike in December supported the CNRP, which had promised to double the minimum wage in their sector to $160 a month if it won power.

The day after the police fired on the striking workers, the authorities dismantled a CNRP camp in a city park and the party effectively ended its protest aimed at forcing a new election. Its leader has said it will resume at an unspecified date.

About 350,000 garment workers had gone on strike, threatening to cripple the country’s main export industry, with more than $5 billion in revenue a year coming in from big international brands such as Adidas AG, Gap Inc and H&M Hennes & Mauritz AB.

“We strongly oppose all forms of violence. It is with great concern that we have observed both the widespread civil unrest and the government’s use of deadly force,” they said.

They were concerned for the security and safety of the workers at their suppliers and the long-term stability of the industry, urging all sides to return to negotiations, exercise restraint and refrain from the use of force.

The government has offered workers a 25 percent increase in the minimum wage to $100 a month. Most of the strikers have returned to work.