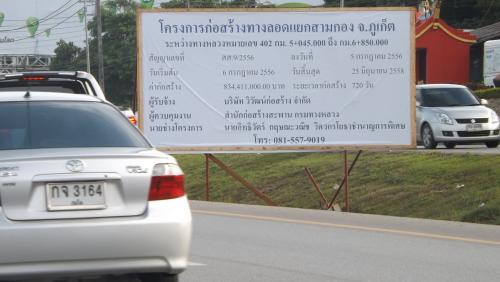 PHUKET: Motorists who have seen the road blocks placed on the median strip in front of Tesco-Lotus on the bypass road (map here) need not fear about long traffic jams at that intersection just yet, the Phuket Gazette has been told.

Phuket Highways Office Director Samak Luedwonghad confirmed to the Gazette that there are no plans to block the road to commence construction of Phuket’s second underpass at the Samkong Intersection until October.

“The road will not be closed anytime soon. We are just preparing for the construction, which may not begin until October, maybe even November,” Mr Samak said.

In April, Department of Highways’ Bureau of Bridge Construction engineer Itthiwat Kritsanawanich confirmed that a construction contractor had been chosen for the Samkong underpass, but had yet to sign the government tender (story here).

It now appears that procedural step has been completed.

The Samkong underpass, to be built at an estimated cost of 850 million baht, is part of a national-government funded project to overhaul Phuket’s road network in an attempt to alleviate traffic jams (story here).

Under the plan, construction of a third underpass is also planned for the Bang Khu Intersection, at the eastern end of the bypass road (story here).

Phuket Governor Maitri Inthusut in July this year unveiled plans to build yet another underpass at busy Chalong Circle, at the south of the island (story here).

The Gazette notes that in 2004, then-PM Thaksin scoffed at, and rejected outright, a proposal to build underpasses at the Samkong junction and the Darasamuth Intersections at a combined cost of 800 million baht, saying that one tunnel long enough could be built for 600mn baht (story here).