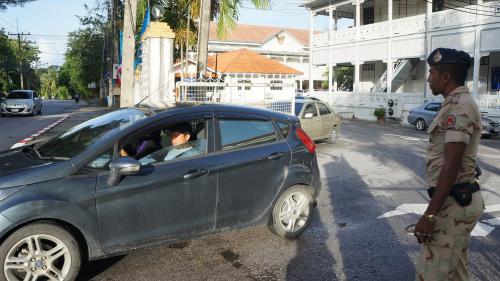 PHUKET: Phuket Governor Maitri Inthusut today assured that the island’s authorities were well prepared to peacefully deal with a large protest planned for Monday in front of Provincial Hall.

The protest will be held at Sanam Chai field (map here) in Phuket Town, in line with the “Bangkok shutdown” being organized by the People’s Democratic Reform Committee (PDRC), led by protest leader Suthep Thaugsuban (story here).

“Mobile toilets are ready and three ambulances will be on site. Traffic police will on hand to help guide motorists past the protest site,” Governor Maitri told the press today.

However, Provincial Hall will be closed on Monday as a precaution.

“Whether or not other government offices will be closed remains at the discretion of each office chief,” Governor Maitri said.

The governor made a point of praising the peaceful nature of protests in Phuket.

“Not one of the large protests held previously in Phuket has gotten out of control. I believe this will hold true on Monday as well,” he said.

“I will not stop anyone from joining the protest. Phuket people have the democratic right to peacefully demonstrate what they want from their government,” he added.

Governor Maitri also clarified that he had not heard any rumors that protesters were preparing to blockade the bridges joining Phuket to mainland Thailand on Monday.

“I have not heard anything about shutting down the bridges. I will look into the accuracy of this information, but I believe the authorities are well prepared to deal with any such contingency.” he said.

Phuket protest leader Suratin Lian-udom, the former Mayor of Rassada, today confirmed to the Phuket Gazette that he had heard the bridge-closing rumor.

“I heard about it two days ago, but if it happens it certainly isn’t the Phuket PDRC,” he said.

Mr Suratin also confirmed that the PDRC was organizing only one protest for Monday, in front of Provincial Hall.

“If there are any other protests held on the island, they are not ours,” he said.