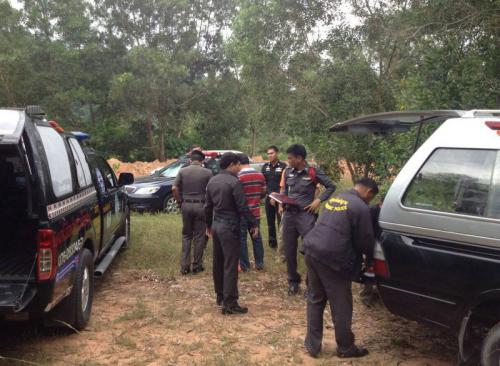 PHUKET: Police are investigating the murder of a 16-year-old boy who had been stabbed multiple times and whose throat was cut before his body was dumped and burned at a wooded location in a remote part of central Phuket.

Police called to the scene – on Muang Chaofa Road, about 3km from Chao Fa West Road (map here) – shortly after noon yesterday said the boy had likely been dead for about three days.

“He had seven stab wounds in his chest and his throat had been cut,” said Phuket Provincial Police Deputy Commander Peerayuth Karachedi. “We believe he was killed at another location, then brought here and burned, possibly to destroy the evidence.”

The victim was identified as Pawarisorn Sae-Ung, and besides his ID card, police found US$11, 50 baht and an ATM card in his wallet.

Col Peerayuth offered three possible motives for Mr Pawarisorn’s murder: an argument with a friend; a fight over stolen money; or because he had knowledge of illegal activities.

He declined to explain why he believed these were the causes.

Nine Phuket heroes due to arrive next month