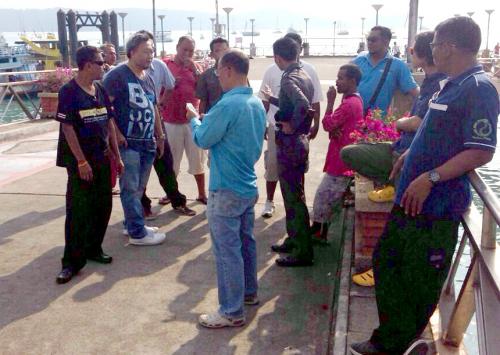 PHUKET: A group of local boat handlers this morning staged a protest at Chalong Pier to call for unrestricted access to boats moored along the pier.

The gathering at the popular terminal for Phuket tour boats (map here) came as officials enforced existing regulations banning motorcycles and motorcycles with sidecars from being driven along the pier.

“These people know they are not supposed to ride their personal vehicles along the pier, but when officials started to enforce the rules they did not want to accept it,” Lt Col Sathit Noorij of the Chalong Police told the Phuket Gazette this morning.

The group of local boat folk disbanded their protest after officials from the Phuket Provincial Administration Organization (PPAO), which operates the pier, agreed to hold further discussions on Monday, he added.

PPAO President Paiboon Upatising told the Gazette he was aware of the protest and aware that charging fees for private vehicles to access boats along the pier was central to the complaints.

“The people who protested work at the pier. Some of them are boat crew,” he said. “These people have known for a long time that they cannot ride their personal vehicles onto the pier. That’s why we offer a shuttle service so people can get to their boats.

“Charging access fees is one way to prevent a lot of people from riding their motorbikes along the pier.

“The rules are to keep the pier clean and safe. If everyone drove their vehicles onto the pier, it would not present a good image for Phuket.”

“This issue is not the sole responsibility of the PPAO,” Mr Paiboon said. “The Phuket Marine Office must come out and make it clear to people that they cannot drive onto the pier.

“The Marine Office allowed people to do so as a temporary measure. Now people are used to doing it, and they do not want a change.”

Central to that delay is the inability of the PPAO and Phuket’s Marine Office to resolve a dispute over operating costs.

“The opening of the one-stop center does not depend on the PPAO only. Several departments are involved,” Mr Paiboon said.

“One of the main offices involved is the Marine Office. Ask them when it will open.”

“The building remains closed because the PPAO President has yet to sign his approval for it to open as he is afraid of the maintenance fees, air-conditioning costs, electricity bills and so on.

“I understand him. We are working on sorting it out so we can open the one-stop center as soon as possible.”