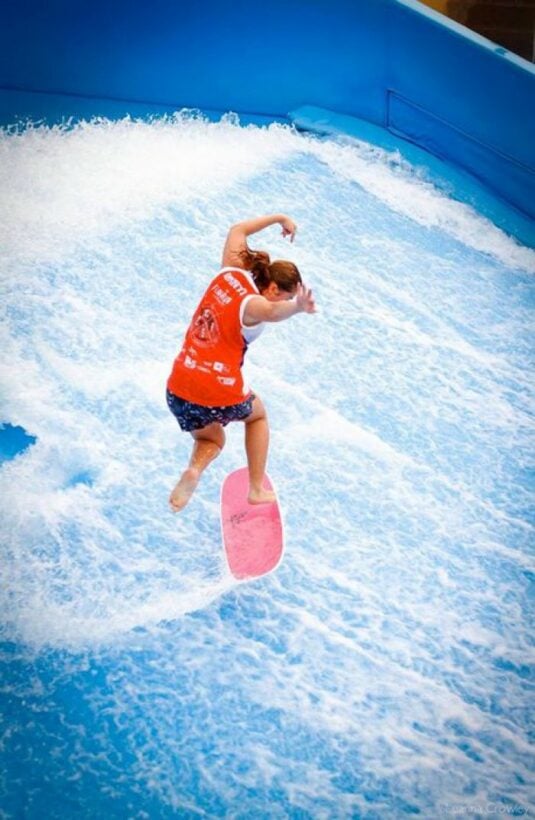 PHUKET: Phuket surf star Anni Flynn has added another trophy to her collection, beating most of the best flowboarders from around the world to take second place at the World Flowboarding Championships in Bangkok last weekend.

In a field dominated by pro-flowboarders from the US, Anni trounced last year’s world champion, and her personal idol, Xana Kai-Nash, but was held from the top spot by US flowboarder Dee Spencer.

Fresh from her victory at the Asian Flowboarding Championships, held last month at the new Cartoon Network water park in Pattaya, Anni said she was nervous to be going up against the dominant US team, but was thrilled when she made it through to the finals.

“I didn’t expect to get through. So I just went out [to the final round] to enjoy myself.”

Cheered on by her team-mates from the Asian circuit, Anni had a faultless final run, including big spins, 360 kick flips, backside 180s and reverse kickflips – all difficult maneuvers in themselves and even harder to incorporate into a single run.

Now back in Phuket, Anni has other big challenges ahead.

“It’s time to get back to Satree Phuket school, where I’m just one of 2,000 girls. So it’s back to normal life for me. I have to get through my final examinations and then maybe next year I can look at going back onto the Asian Surfing Tour and getting a spot on the pro circuit. But I need to get a lot more wave time first,” she said.