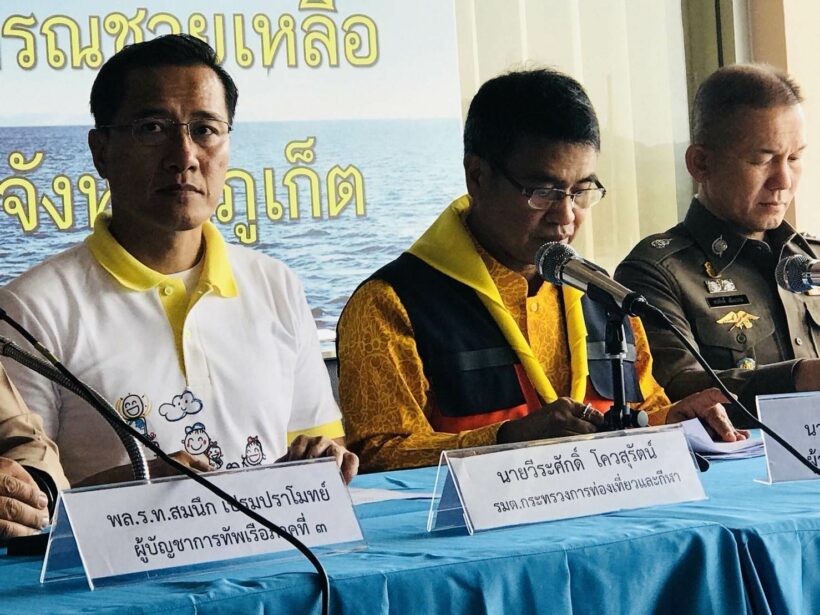 As we emerge into a wet and soggy Monday morning in Phuket, after three full days of frantic searching in the waters south west of the island, 13 bodies, of 41 which have already been recovered, were children who have drowned in the tragedy – 8 boys and 5 girls.

Searching has been expanding to Phang Nga Bay and the waters off Krabi Province. One more body has been found inside the wreckage of ‘Phoenix’ but cannot be recovered at this stage.

No more bodies were recovered in the search yesterday (July 8).

The Minister of Tourism and Sports Weerasak  Kowsurat says, “all 41 bodies have now been identified. The private sector has already supported the mission to recover and repatriate the bodies, including equipment to assist the over-whelmed local morgue at Vachira Hospital in Phuket Town.

The Commander of Police Region 8, Pol Lt Gen Sorasak Yenprem says, “a manager  of the company which is responsible for operation of the ‘Serenata’ boat, named ‘Peng Ta Ping’, has been charged with a reckless act causing injures.”

The ‘Serenata’ boat manager has also been charged with reckless act causing injures.

Thailand’s PM is visiting Phuket today for a briefing on the tragedy and speak to Chinese consular officials.