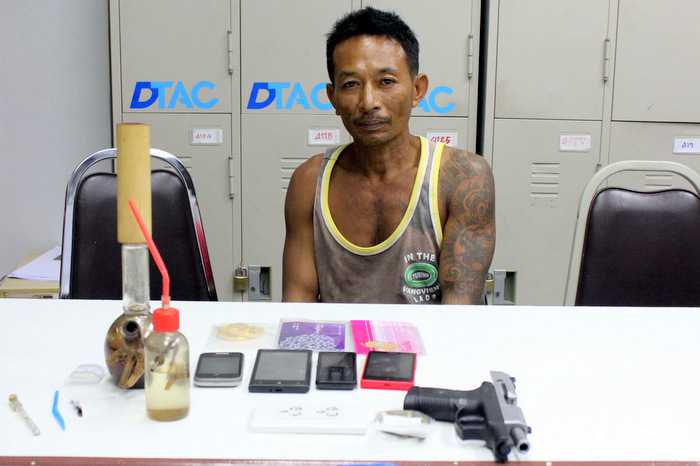 PHUKET: Police arrested a dive boat captain who is also a co-owner of a bungalow resort on Phi Phi Island for possession of methamphetamine and drug paraphernalia yesterday.

Acting on a tip-off, officers arrived at the house of 45-year-old Preecha Riabrieng, in Rassada, at about 6:30pm.

“We received information from a source about a suspected drug dealer operating on Phi Phi Island,” said Lt Col Parinya Tanthasuwan of the Phuket City Police. “We went to the address given and found everything.”

Officers discovered 160 pills of ya bah (methamphetamine), 700 milligrams of ya ice (crystal methamphetamine) and a meth pipe, as well as a pipe for smoking marijuana and Mr Preecha’s 9mm handgun.

Officers also seized Mr Preecha’s bankbooks, but did not disclose how much money was in the accounts.

“Mr Preecha owns a dive boat [police declined to name the boat] and is a partner in the Nice Bungalow resort on Phi Phi Island,” Col Parinya said.

“He has been charged with possession of a category 1 drug with intent to sell. The handgun was legal and registered, so there were no charges associated with that piece of evidence.”

Mr Preecha admitted that all the contraband belonged to him, but denied the charge of being a drug dealer, saying that the drugs were for personal consumption.

“I do not sell drugs. I bought these for myself because I work alone and hard – they can help,” he said.