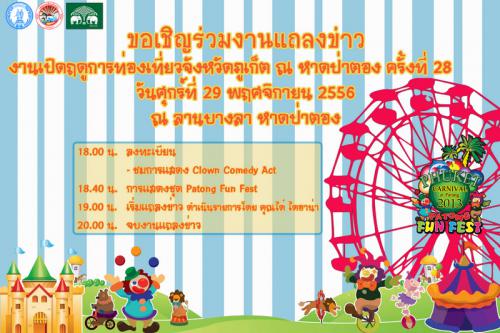 PHUKET: Phuket officials are scrambling to find a location to set up the Patong Eye, a giant Ferris wheel that is hoped to spin out fresh revenue during and after the Patong Carnival starting on December 15.

“However, at this point I can’t confirm where it will be. We are considering Loma Park [map here], as well as several other venues,” Mr Chairat said. “I originally wanted to install it at the entrance of Bangla Road near the police box, but beach vendors and other operators nearby rejected the idea.”

If officials are unable to find a location, it is very likely that the Ferris wheel will never become the “Patong Eye”, but will instead end up somewhere else in Thailand, either Chiang Mai or Siam Paragon.

“No matter what, though, it is only a temporary attraction, as it is destined for Beijing, China,” Mr Chairat said. “At one point they were considering sending it to Hong Kong, but there is already a Ferris wheel there.”

Pushed for more information about the company, Mr Chairat said that details would be released today at the official announcement for the Patong Carnival.

Sights set on a Safer Phuket