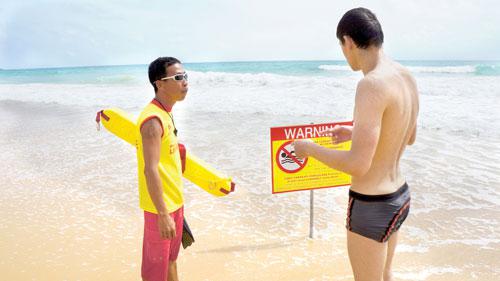 PHUKET: A new safety initiative was launched this week with the aim of improving the island’s coastal water safety through significant changes in safety standards and training. The initiative, ‘Safer Phuket’, has received executive level support, endorsed by Governor Maitri Inthusut along with backing from several Government departments and HE Ambassador Mark Kent of the British Embassy in Bangkok.

Martin Carpenter, the British Honorary Consul in Phuket and Safer Phuket co-founder commented: “We believe that with all the key stakeholders working together, and with a common vision, we can establish a set of solutions that can be quickly implemented, are sustainable, and will be beneficial to all.”

Safer Phuket came out of the widely reported meeting between Governor Maitri and 18 European Community representatives in June of this year, where it was determined that a focused effort and attention were needed to improve a number of aspects of the Phuket tourism industry.

Marine safety was one of the major areas highlighted during the meeting and this recognition of the need for change prompted an in-depth review to identify potential solutions. As a result, the Safer Phuket initiative was born, which is timely, given the large number of serious incidents and loss of life in and around Phuket’s waters to date this year.

The island’s reputation as a leading world holiday destination has been undermined by numerous drownings and other safety incidents that have also been given widespread international media coverage. Ms Tarin Tachthongchan (‘Chompoo’), the project’s co-coordinator says: “I have worked in the Phuket hotel and tourism industry all of my life and I want my child to enjoy the same employment prosperity and prospects that I have had. I am committed to Safer Phuket because we must take care to protect our future and our island by safeguarding our nationals, residents and valued visitors during their holidays.”

The campaign will be run and managed by a newly formed social enterprise, operating on a not-for-profit basis, with a mission to highlight relevant issues, create a voice, bring stakeholders together and provide funding to implement solutions. Safer Phuket Co-founder Peter Grimes explained: “The need for improving safety never goes away, so we chose to be a social enterprise business so that we can secure ongoing revenues which will allow us to build a structured, sustainable platform and support infrastructure for the safety programs that we will introduce. We will not have to rely on charitable donations, and can therefore control our own destiny and provide transparency, confidence and security to our partners, tourists and all stakeholders.”

Many might ask if Safer Phuket is different from previous initiatives or whether it will be just another well intentioned scheme. Safer Phuket Managing Director and Co-founder Duncan Stewart feels there is room for optimism: “We recognize that what we are trying to create will be viewed by some as challenging, which is exactly why we must succeed. Change is inevitable and our view is that we have a responsibility to manage that change so we can re-establish confidence and generate prosperity and security for all who live in or visit Phuket.

“Safety must be our number one priority and we need to respect the trust shown in us by the residents and visitors who choose Phuket as their home or vacation destination.

“We feel that Safer Phuket can make a real difference because we have unequivocal cross cultural, political and island-wide organizational support. Together with our partners, we have a collective vision shared and endorsed by the appropriate political and commercial forces which will provide the framework necessary for a safer future for Phuket,” he continued.

“In the wider context, the time is right for change, so Safer Phuket will be a pioneer of positive change and help facilitate and manage Phuket’s evolution to an internationally recognized safe holiday destination.

“With the 4th Asian Beach Games scheduled to be held in Phuket in 2014, the eyes of the world will be upon us, so we have launched the second wave funding campaign to support and enhance the current work done by Phuket lifeguards.

Safer Phuket will build, man and operate 50 new lifeguard towers across all of Phuket’s main beaches. “We see this as a demonstrable statement of safety intent that lets the world know our commitment and intentions,” Mr Stewart said.

The lifeguard stations and professionalizing of the island’s lifeguards will be entirely funded by advertising and sponsorship of each tower, and Safer Phuket is already in discussion with interested sponsors and supporters, even before its official launch.

The Phuket Gazette and PGTV are founding sponsors and proud media partners of Safer Phuket. For more info, visit: saferphuket.org or facebook.com/saferphuket.

The Genesis of the Phuket King’s Cup Regatta