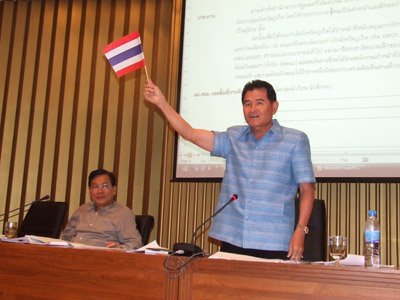 PHUKET CITY: Even as military troops and hardware deploy in Thalang, the leaders of Phuket’s small ‘red-shirt’ movement say they have no plans to disrupt the Asean-led meetings set to begin in Cherng Talay a week from today.

In fact, they plan to be in Chiang Mai for a meeting of their own while the talks are on, their leader says.

Phuket UDD leader Wisut “Ae Inside” Tangwittayaporn, head of the National United Front of Democracy Against Dictatorship (UDD) movement in Phuket, says his group wishes the talks are a success.

The group has no intention of disrupting the meetings, he said.

“We have already confirmed with the UDD leadership in Bangkok that we will not take any action during the Asean meetings and that we will oppose any red-shirt members who try to disrupt proceedings.

“To quell any uneasiness the governor may have, we informed him that all red-shirt leaders in Phuket, about 80 of us, plan to leave Phuket for Chiang Mai to attend a big meeting while the talks are on,” he said.

The exact date of the UDD meeting has not been set, but Mr Wisut said he expects the red-shirt leaders to return only after the Asean meetings conclude.

Mr Wisut says there are about 20,000 red-shirt supporters on the island.

He hopes all of them will sign a nationwide UDD petition to be presented to HM The King requesting a Royal Pardon for fugitive former prime minister Thaksin Shinawatra.

Thus far about 10,000 signatures have already been collected in Phuket, he said.

However, the UDD petition has drawn scorn from many quarters, both for legal reasons and because it is seen as a way of pressuring HM The King, who is bound by the constitution to remain above politics.

On the other side of the political chasm, the leaders of the Phuket branch of the yellow-shirted People’s Alliance for Democracy (PAD) also say they hope the Asean-led meetings go off without a hitch.

Krich Thepbamrung, a consultant to the PAD branch in Phuket, yesterday told the Gazette, “Like anyone who wishes the best for Phuket, members of the Phuket PAD will be keeping watch for any potential problems that might arise.

“We have already been in touch with the Internal Security Operations Command and related agencies and know what danger signs to look out for. If anything bad happens that is beyond the ability of security forces to handle, we will come together as Phuket people and do our best to prevent disruption of the meetings,” he said.

“We have a network of PAD supporters in nearby provinces such as Surat Thani, Krabi and Phang Nga and will inform police of any intelligence we get about possible movements to disrupt the meetings in those areas as well,” he said.

Meanwhile, yesterday afternoon at Phuket Provincial Hall, Phuket Governor Wichai Phraisa-ngop chaired a large meeting with representatives of all related agencies to prepare for the event.

While security was a key issue, preparations for decorations and a welcoming ceremony were also discussed.

The province is planning to line sections of the road from Phuket International Airport with scores of flag-waving students to greet the delegates as their motorcades pass by.

The dates and times of the spectacle have not been confirmed, however.

Foreign delegations from at least 27 nations are expected to attend the talks, which include the 42nd Asean Ministerial Meeting, Post Ministerial Conferences and 16th Asean Regional Forum.

Photo Walk in Phuket on Saturday