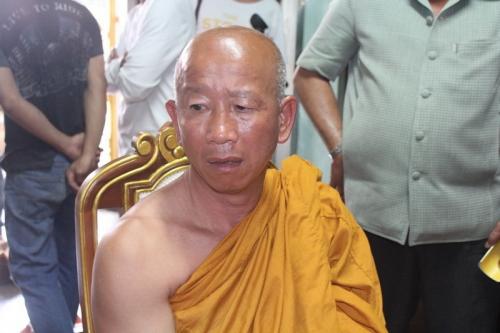 PHUKET: A monk chose to be defrocked at the main temple in Phuket Town, Wat Wichit Sangkharam, this afternoon after being caught stealing a temple donation “money tree” and running off with 1,000 baht in cash.

Wichit Police were alerted to the theft at 11:30am after local residents near Wat Nakaram (click map here) reported a monk absconding with a merit-making “tree” from a local mom-and-pop store.

“The monk went into the store and asked to use the restroom. When he came out he grabbed the money tree and bolted out of the shop,” Sub Lt Sakorn Naklert explained.

“We searched the immediate area and found the bucket the money tree had been in, but none of donation envelopes were found,” he said.

However, while police continued their search for the monk, a group of local villagers caught the 56-year-old in the act of discarding the money tree, now stripped of its cash-filled envelopes.

“After searching his few possessions, we found that the monk was named in his identification book as Phra Boonmee Pasanajitto. He was ordained as a monk at Wat Potan in Chaiyaphum province in 1999. Before he entered the monkhood, his name was Boonmee Wichaisuek,” Sub Lt Sakorn said.

“We also found eight empty donation envelopes and 1,000 baht cash in his bag,” he added.

As Mr Boonmee denied to police that he stole the tree, the officers took him to Wat Wichit Sankharam, where senior monks deliberated whether or not Phra Boonmee should be disrobed for his conduct.

“At first he denied the allegations. However, he eventually agreed to leave the monkhood as the people who caught him said they would not let him go until he was no longer a monk,” Sub Lt Sakorn said.