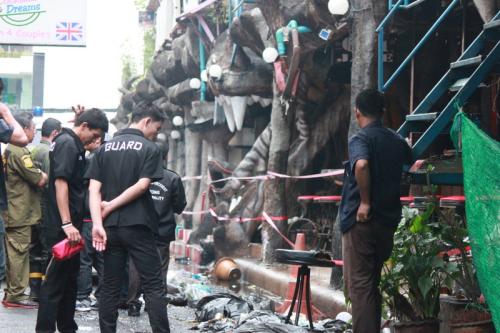 PHUKET: Charges are yet to be laid against the owners of the Tiger Bar and Discotheque following a fatal blaze which ripped through the Patong nightclub five months ago.

The fire, which took place on August 17, killed four people, including two tourists, and injured 11.

“Additional information had been added to the case files shortly before New Year. We will make a decision on the case very soon,” Mr Kitjaruk said.

Patong Police first investigated the case and transferred their files to the prosecutor’s office in October.

Patong Police Superintendent Chiraphat Pochanaphan previously told the Gazette the nightclub’s owners would be charged under Section 291 of the Thai Criminal Code: Causing death through negligence.

Other anticipated charges included causing physical and mental injury and trading after hours.

On the negligent death charge alone, the defendants could face up to 10 years in prison or receive a fine of up to 20,000 baht.

Charges were not immediately pressed because the defendants’ lawyer appealed for “a fair investigation into any allegations of wrongdoing.”

Swiss tourist dies after being pulled from Phuket waters